My Girls and Atanu's Brilliancy

Friday I had the pleasure of watching "my girls" compete. They stormed ahead early scoring 12/12 in the first three rounds and looked set to take the title but a loss in the second last round allowed the Somerset team to take a narrow lead. Of course the last game to finish decided the event. Stephanie Kay of Somerset College won solidly and took the gold with an individual performance of 7/7.

Anastasia, Jane, Penny and Abbey (silver with 6/7) were a bit disappointed to finish second but soon recovered enough to pose for a photo with their medals. 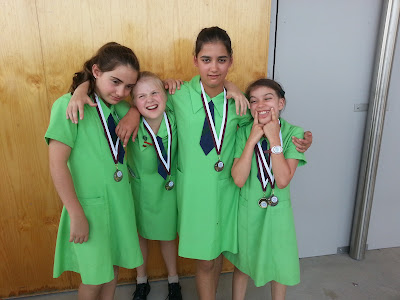 Meanwhile the Somerville senior team won by a margin of 6 (!!) points with the top two boards making 7/7. Somerset were second. And here, the victorious Somerset junior team. Detailed results can be found here. 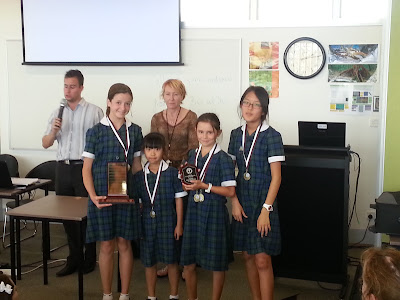 Atanu Lahiri is an Indian IM, chess administrator, coach and organiser. This game that he played below is sensational. I was not able to upload the Video in Nepal but have now ironed out the kinks ( I hope) and would like to share it with you. Enjoy. 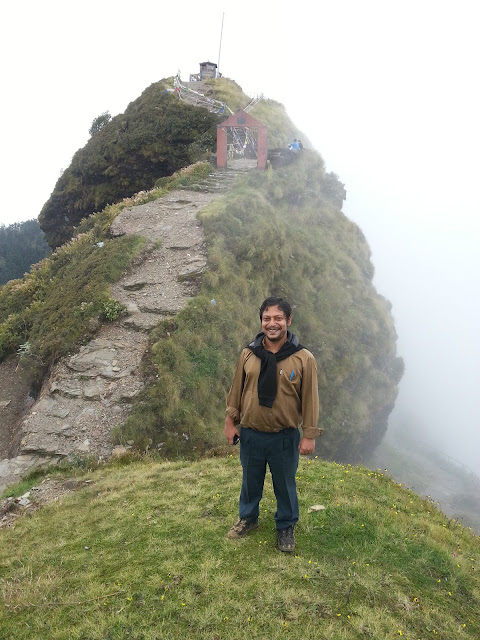 Did Atanu get his inspiration here on Mt Kalinchowk? Probably.

If you look at the map of Nepal you can see what a good idea it was to get off the bus. It has to go via Bharatpur because the mountain road is closed to buses. A 3-4 hour journey is tripled. We did not however just change modes of transport. This is the home of Krishna Thapa, a chessplayer known to many Sydney-siders and treasurer of the Hetauda chess club. Krishna's mother was kind enough to make us a cup of tea before we retired to comfortable beds. The horror bus rumbled on without us :)

We slept in to about 9am, my first pleasant sleep in ages. A nice shower was followed by tea and breakfast. We did contemplate going to town at some stage for some shopping but noon arrived before we knew it. The president of the Hetauda chess club wanted to meet us and had said he would pick us up at noon. That's exactly when he arrived!

First on our programme was the Martyrs Memorial Park. While we were on our way to the park Krishna got a call informing him that the bus had just arrived in Kathmandu after several delays. Many strikes blocked the road, protesting loadsharing. All over the country the electricity would go off  for a few hours to reduce the burden on the grid. 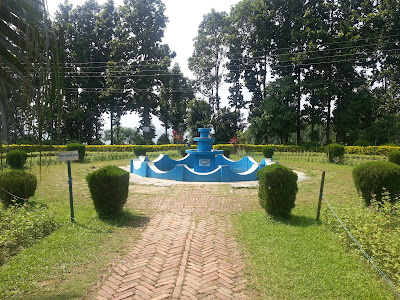 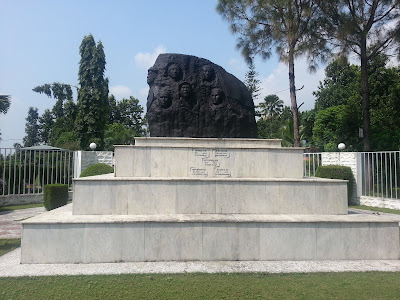 Martyrs rock, sculpted out of a single stone. 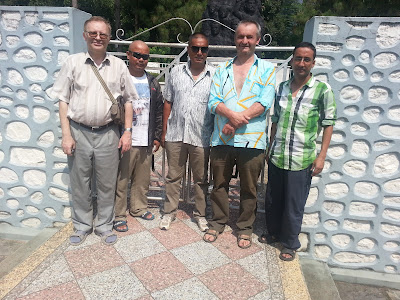 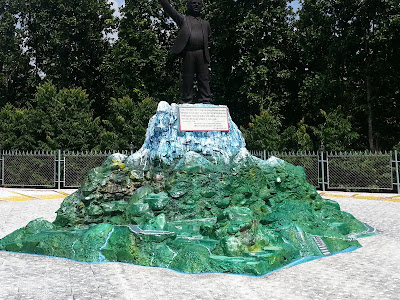 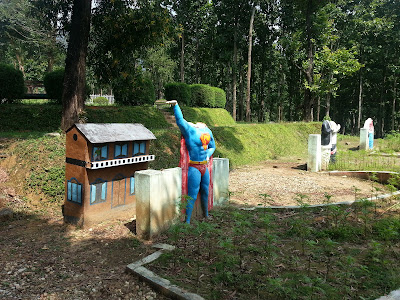 So that's what happened to Superman!

That's what the map says. There are two ways over the mountains. The other is the Tribhuvan highway and is a bit longer but worth seeing apparently. Next time. 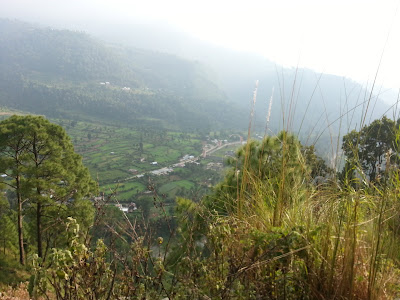 The road up the mountain. 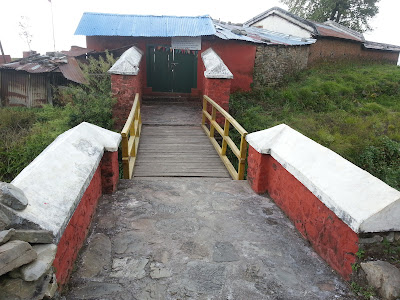 This is apparently the former Kings Monastery. We got this information from two ladies outside. They also casually mentioned that they (women) are not allowed to enter. Provokes a thought. Should one respect "traditions" or religious rules that are clearly discriminatory 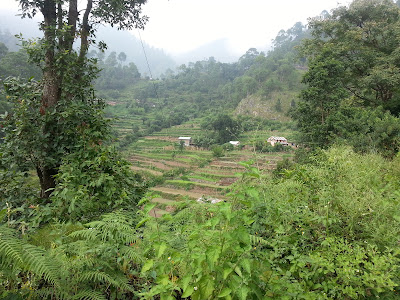 The hills are all terraced. Everywhere you can see people ploughing the fields with either Yaks or by pulling ploughs themselves. 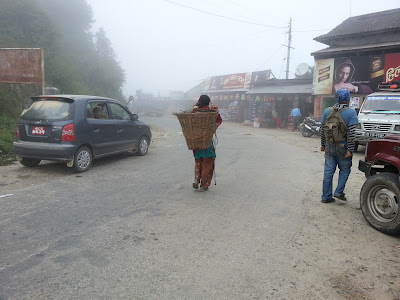 The summit at 2400 metres according to locals, the highest point of the ranges between Hetauda and Kathmandu. This is the town of  Kulekhani I think. 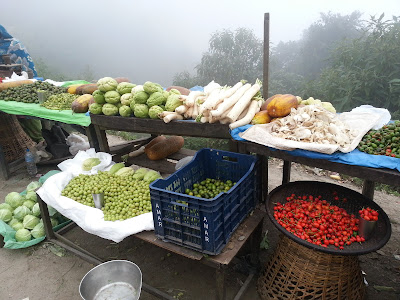 Organic vegetables being sold by the roadside. I saw some wild oyster mushrooms and had to have them. The cafe agreed to cook them. 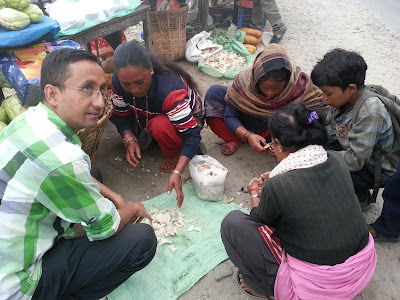 Krishna and the local women offered to clean them first. 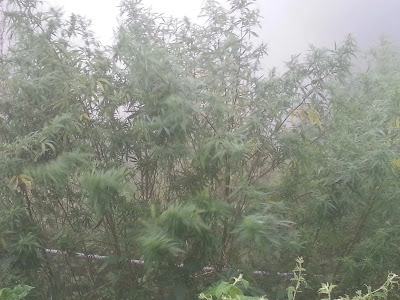 While waiting I saw this plantation next to the road. Perhaps a special highland tea? 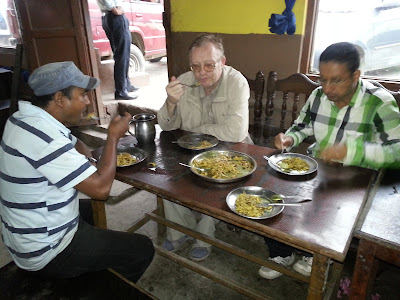 Alexandr, Krishna and our driver enjoying the mushrooms. 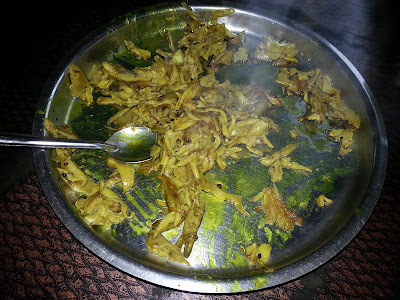 Fried in garlic, onion, chilly and a dash of curry.

By the time we had finished it was late afternoon so we headed straight down the mountain to Kathmandu. We passed the Kulekhani Dam but were not allowed to take pictures in this zone.  The light was not good enough for pictures anymore anyway.

I was a bit unfair to Kathmandu last time I wrote about it. I take nothing back of my impressions of the bus station area but there are other places. I spent the night in Thamel,  the tourist district, which is a happening place. Accomodation was a bit tricky. The famous Kathmandu Guest House was ridiculously expensive at $US 160 a night and even the special offer was $80. I was so desperate for comfort I nearly took it but reception did not accept my final offer luckily so I walked out, went 50 metres to the left and found the Hotel Northfield which had en-suite, wi-fi and was $13 a night. Much better :) An added bonus was that the attached "4ever Cafe" is run by a chessplayer. Thamel is a happening place with lots of music, bars, restaurants and shopping. Prices vary widely so give yourself plenty of time and ask around before you buy.

All in all Nepal is a very interesting country that is worth seeing despite the annoyances. Chess is becoming more popular and there are many tournaments planned. If/when I receive some information I will let you know. Have a nice day all :)
Posted by doubleroo at 22:06 1 comment:

The best way to avoid repeating a bad experience is to analyse what part was your doing. This time it is obvious. I did not take matters into my own hands but rather gave someone, who had previously told me a load of codswallop, the benefit of the doubt. Anyway, instead of the nice airconditioned private car which was going to take me and GM Fominyh to Kathmandu via the Chitwan national nature preserve  etc etc. It sounded like a dream.

Now reality. The evening after the tournament I asked MR R.H.J for deatils, like when our car would be leaving. Answer. "Speak to Bidur". Well I heard no more until the next morning. There I was presented with a ticket for the "Horror Bus" It left at 2pm. We carried our luggage to the bus station and then proceeded to our Hotel where all the local players got on :) Was someone deliberately taking the mickey? Oh well I thought, can't be worse than the last time. 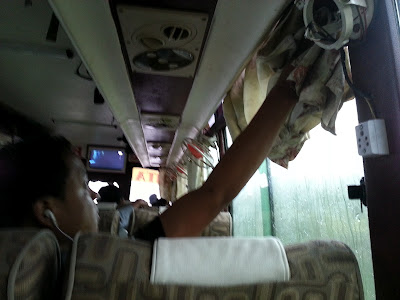 Famous last thoughts. This time it was raining heavily and the deluxe luxury bus was leaking like a sieve. 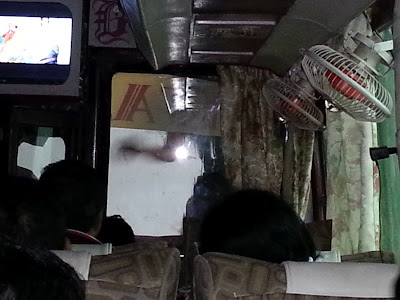 Now the driver armed with an umbrella and torch was wiping or cleaning the windscreen by hand. The luxury deluxe bus did not have windscreen wipers :) So in the pouring rain on a winding mountain road we descended into the valley without wipers or very good lights. I guess the driver knew the road. AT this point I had to carry my laptop bag on my lap because the floor was full of water...of course. 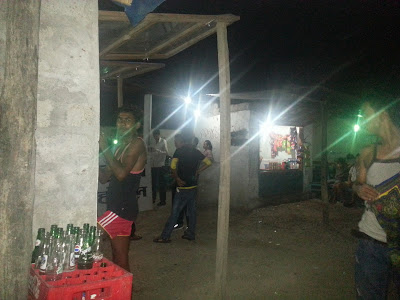 Finally, the plain. The rain stopped and we pulled into a bus stop. We had some snacks, a cup of tea and continued. 13 hours later we got to the town of Hetauda. Here GM Alex got off the bus together with my last round opponent Krishna Thapa. They were planning to rest a few hours and then take the short-cut to Kathmandu by Jeep and invited me to join them. I jumped at the chance, literally. The bus was scheduled to arrive at 9am (now 2am) so staying on board would have meant another 7 hours of torture. The bus finally got in at noon so it would have been 10.

We spent the night at Krishna's place and were warmly received by his wonderful parents. Then we took a Jeep to Kathmandu the next morning. A great, picturesque journey. Report to follow when I get back. Now I am off to the Airport. :-) :-) :-)

Posted by doubleroo at 23:05 No comments: