In the mountains behind Mullumbimby we have a secret training base 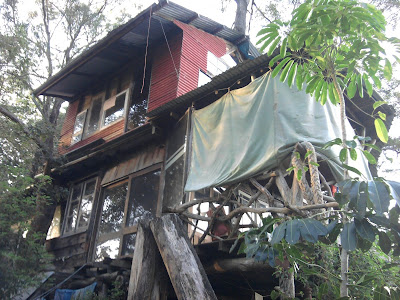 and the last few sessions we had discussed a line of the Scotch opening. After the introductory moves 1. e4 e5 2. Nf3 Nc6 3. d4 ed4 4. Nd4 black rarely plays Qh4 but this move just wins a pawn! It is true that a well prepared player will get plenty of compensation for that pawn. My opponent today was not prepared and just lost a pawn. Again my junior opponent played until mate.

In case you did bother playing through this game and are now wondering why I promoted to a knight instead of a queen, no you are not missing anything, I was just playing with my food. We both used hardly any time for the game and under-promotion is always nice.

Some gratuitous advice. If you play the Scotch, learn the 4........Qh4 line and if you face it as black you may want to call your opponents bluff at least once.

So 4 days of fasting and nicotine abstinence are over. I am down to 105kg and starting to breathe normally again. Got to get healthy before the Australian Championship in Geelong at the end of the year. A friend encouraged me yesterday to go down there and retrieve MY title :-)
Posted by doubleroo at 03:56