No excuses today, just a fight with many mistakes by both sides. My opponent went wrong first by capturing on d2 with the Queen. If instead 10.Nd2 I cannot move my e pawn (it loses a pawn) so white would have time to play e4,f4 Nf3 and rooks behind. I am not sure where black can find counterplay.

Black was better and I was carrying out my plan unhindered when I suddenly had a brain meltdown with 23...b5 forgetting that the d3 knight defended the rook on f2. Luckily I spotted my mistake immediately and continued as if nothing had happened.

We then got into a messy tactical melee with a swinging evaluation until I played the final blunder 44....Qa3. Instead I should play Qd4 and the position is about equal. This would have given me the opportunity to blunder later. Or maybe..... Spilt milk.

I was feeling a bit annoyed about my play after the game but that soon evaporated when we went to the best Chinese dumpling restaurant ever. Good food, good company, all good. 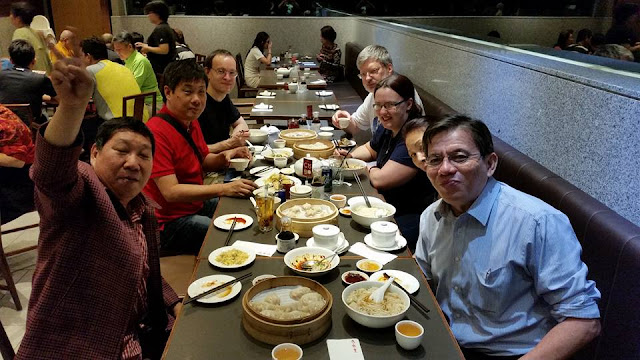 Now to try and survive another double round day starting at 9am.
Posted by doubleroo at 10:14