Problem Solved! ChessBomb to the rescue. Mumbai Round 5,6,7.

I have been too lazy to input my games in the last few rounds. It started in round 5 when my opponent played until Mate. Also, the demonstration a few days ago delayed the round by a few hours and we got back very late...and to be honest I wasn't enthusiastic enough about demonstrating them to you.

Today I was motivated to at least find out how I only drew a position I felt was overwhelming. While looking for a computer evaluation without too much effort, on ChessBomb, I saw an "embed" button. Could this mean what I think it means? Oh, yes, yes it does. A simple copy&paste method of showing the games with little effort on both your part and mine 😀

The last few days I have been minimising the discomfort of getting to the tournament hall and back. and have taken UBER's or Rickshaws. This required taking a backpack and my tablet with me so I am able to bring you a few pictures of the tournament hall.

Oh yeh, there is also a great restaurant near the playing venue called Kailash Sarovar. I cannot remember anything better than the Pista (Pistachio) Milkshake I had there. The Palak Paneer and Garlic Naan were first class as well.

Back to the venue.

It is a nice hall, and all or most of the games are broadcast live. If there were just six inches more room between the boards, at least enough to fit the scoresheets... 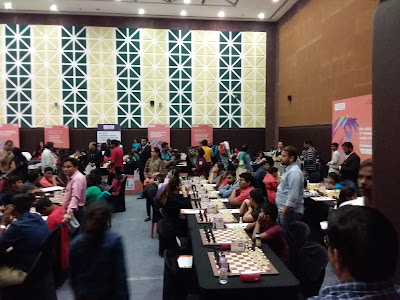 There is ample space for parents outside the playing hall. Food, drinks, and chess stuff is for sale at very reasonable prices. 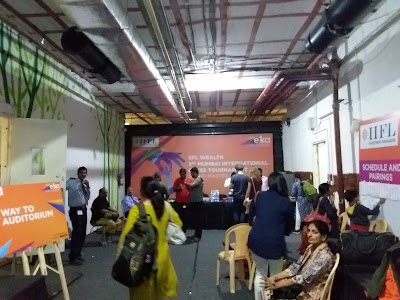 Parents are allowed in before the round starts but are then asked to leave. Good move India! 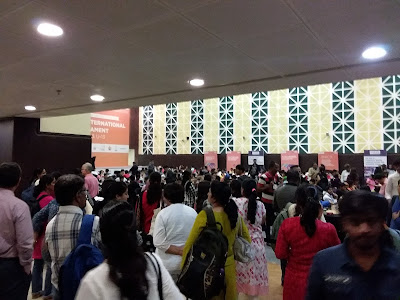 Now to the last few games.

I played a talented young girl who had some good results. Am also not sure where she went wrong. By the time we got to the ending her position was difficult. I have noticed that a few of the Indian youngsters play until Mate. Maybe there is a coach around that advocates that.

Quite a smooth game but I was perplexed by my opponent allowing the knight fork instead of just playing Rc1. Yes, not pretty but worse than giving an exchange for...what exactly?

This, today's game,  was particularly annoying. 14.Nb5 gives white an excellent position but I started looking for the instant knockout blow instead of just building pressure. The little brat kept playing with his chocolate cookie packet, clicking his pen, etc, and most annoyingly, finding only moves not to lose immediately.