Scandal at the George

It is nice to be back in Auckland again and to be playing at the Auckland chess centre. I am staying with an old friend and colleague, Bruce Watson. He was kind enough to pick me up from the airport and take me back to his house. I asked if I could stay with him rather than a motel, as I had pleasant memories of my previous stay.

As luck would have it, we were playing in round one.

I have always enjoyed playing in NZ and perhaps not playing even more, as it is the most beautiful country I have seen so far. If you have been reading my blog for a while you will have seen many posts with plenty of spectacular pictures, taken with a phone by an incompetent but enthusiastic photographer.

This time, however, it is not all cookies and teddy bears. Everyone is a bit disappointed that the star GM Timur Gareyev couldn't make it due to visa issues I believe, so GM norms are no longer possible. No biggie though, we are all chessplayers and there is no more welcoming and friendly place than the Auckland.

Unfortunately this year the tournament has started on a sour note.

About 10 minutes after the round started I visited the bathroom. Below is a picture of the view out of the window. I observed IM Izzat using his phone. He glanced up in my direction and swiftly put it in his pocket. 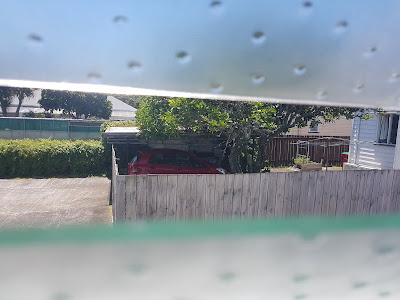 I immediately informed the chief arbiter and returned to my board.  He went outside and found Kanan still in the carport next door and told him to return to his board ?! Some time later, when I noticed no action had been taken I saw the organiser, Michael Steadman, and the zone president, Paul Spiller, in the car park I informed them as well. They also seemed to show little interest. But perhaps it was more shock as these things don't happen here.

By this time my position was a little suspect so I offered a draw, which was accepted. I won't bore you or embarrass myself with the moves. If you must have them here is the link.

During our postmortem, Brandon Clarke and Izzat Kanan also walked in having drawn their game at Kanan's suggestion.

On the way home I relayed the events to Brandon. Naturally, he was incensed. Soon after arriving back at our host's house, Bruce Watson, Brandon started making phone calls and also perceived a distinct lack of interest.

I noticed a friend online, who is in FIDE, and he did show considerable interest. First, he sent me a link to the relevant FIDE regulations and then sent an email to NZ, asking for clarification. Coincidentally about an hour later Brandon got a call from the arbiter and there was some movement on the issue.

Kanan was emailed with a request to respond to the allegation that he was on his phone and he confessed, claiming it was his second phone (he handed one in) and he had inadvertently left it in his jacket pocket and when he realised, he went outside to switch it off. I guess it's up to each individual to judge the plausibility of this explanation.

Izzat Kanan has now been forfeited for the first round. It will be interesting to see what further action, if any, will be taken.

Bob is always a tough nut to crack and today was no exception. I did get a nice position out of the opening but it was never much more than half a pawn, although it looked like more to both of us. I was the first to blunder with 30...h6, overlooking 31.Bc7 Rc8 32.Rd6 so had to bail with swapping the bishop and trying to trick Bob in the double rook ending. Because of his time pressure, it succeeded. He missed 50.Rg2! sacking a rook to queen a pawn. Lucky me.

After the round, the arbiter asked me for a witness statement. This time he wrote it down, having acquainted himself with the exact regulations, including the compulsory "form A". He was also kind enough to inform me that there are sanctions available for players making repeated unsubstantiated accusations 😡, quickly adding that this does not apply in this case as the perpetrator had confessed.

I must add that in all the years that I have been coming to NZ, this is my first negative experience. I'm guessing that the situation has taken everybody here by surprise, as these things never happen here.

I'm sure that with due consideration of the facts the right decisions will be made. Rules about leaving the venue will undoubtedly be tightened up and there will be less reliance on people doing the right thing.