Double round days are never easy but yesterday was particularly taxing on the Australian team. In the morning we were paired with the talented young Kenyan team and in the afternoon, with the Canadians who outrated us by hundreds of points on every board, more than a thousand on board 4.

The morning round started at 9.30am which left little time for breakfast let alone preparation because we had to leave the Hotel before 9 because the venue is some way from the Hotel. we also had only a few games of the Kenyan players to peruse.

Most of the games went the distance so there was not much time to take another long Bus journey back for lunch.

I was not able to join the team because I had to attend a meeting of coaches/ non-playing captains to discuss a pairing issue. This was particularly annoying because of the subject discussed.

Politics raised its ugly head because the Iranian team was issued a directive by either its government or chess association that they couldn't play against Israel. The organisers were not prepared for this so no announcement was made before the start of the tournament. Therefore the round 2 pairings had to be changed. This now affected everybody else and some countries got easier or harder opponents than the ones they had prepared for and were understandably a little perturbed.

Apparently, as I understood it, the organisers had received a phone call from FIDE that the two countries were not to be paired. Another country wanted to see the instruction in writing because they had spent considerable resources to attend.

My thoughts were, this is why I am not having lunch and preparing with my team?

By the time I returned, had a quick bite, the team was already on their way back to the venue. 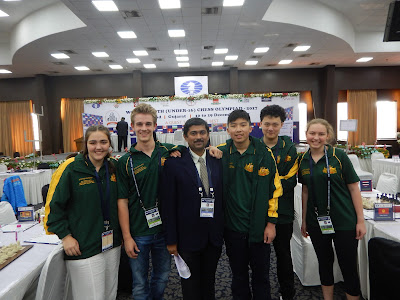 Between rounds, our team was busy getting photographed with organisers. 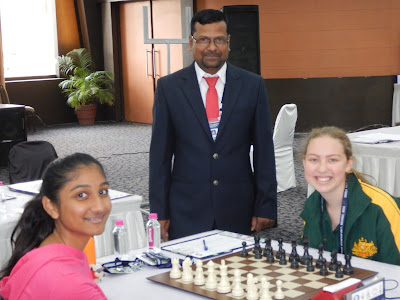 Brigitte Watkins is all smiles before her first Olympiad game. 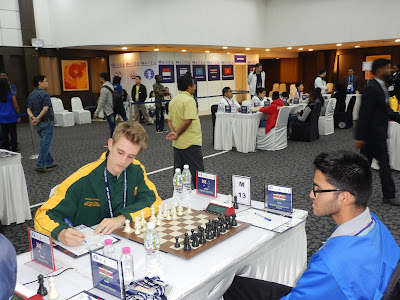 Hughston Parle focused on getting his scoresheet filled in properly. 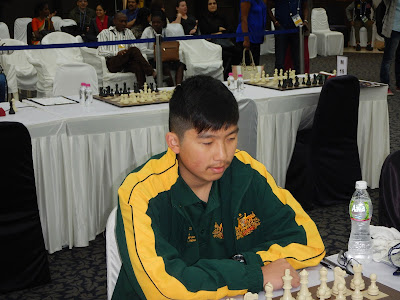 Gordon Yang getting himself in the zone. 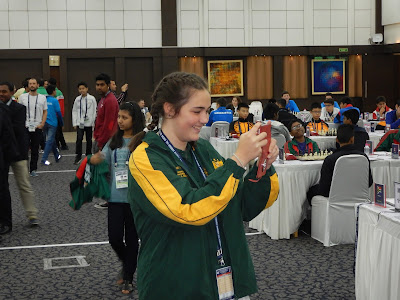 We outrated Kenya on the top three boards but they were no walkovers. Hughston answered the Petroff defence with 3.d3, preferring to just play chess. Black launched an early attack but was quickly repulsed and the game was the first to finish.

On board 2, Isaac played the Sicilian, got a nice opening, went slightly astray in the middle game but once queens came off, ground down his opponent efficiently.

Gordon won a piece in the middlegame with a tic tac but not in the most accurate manner so his opponent got sufficient compensation. A rook blunder helped end the game quickly.

Brigitte started her first international game rather nervously dropping a pawn early but then settled and launched a sacrificial attack on her opponents King. After a few inaccuracies by both sides, this position was reached with black to move. Brigitte swapped Queens and won the endgame. Can you spot what she missed? 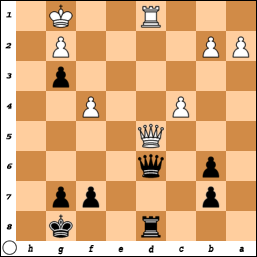 So we won 4-0 but not without some anxious moments.

We were definitely the underdog on every board and things looked bad early on but the entire team fought like lions. late in the evening when most matches had already finished; all four players were still fighting.

Hughston had an equal, symmetrical position until the late middlegame. Then, in an attempt to go for the full point, he sacrificed the exchange for a central pawn and attack. It nearly paid off but an inaccuracy and great defence by his opponent thwarted his ambitions.

Isaac let his opponent control the centre and despite dogged resistance, he too went down eventually.

Gordon also sacrificed an exchange but couldn't get quite enough for it.

Sophie went wrong, in a Sicilian middlegame, early, as many of us do, but then just as we were all expecting imminent collapse, she found incredible resources and forced her opponent on to the increment, even getting to threaten mate. Eventually, the start she gave her opponent proved to much.

So a 0-4 defeat but one the team can be proud of. These youngsters know how to fight and if they can do so on equal terms the result might be a lot different.

That's actually my job but I was unable to do it yesterday, partly because of the double round and partly because I was asked to attend a meeting caused by political stupidity.

Well, its understandable. If you let young people from warring countries meet each other, they may make friends and then its much harder for the idiot politicians to make them hate each other.

Did I mention I hate politics and warmongering politicians?