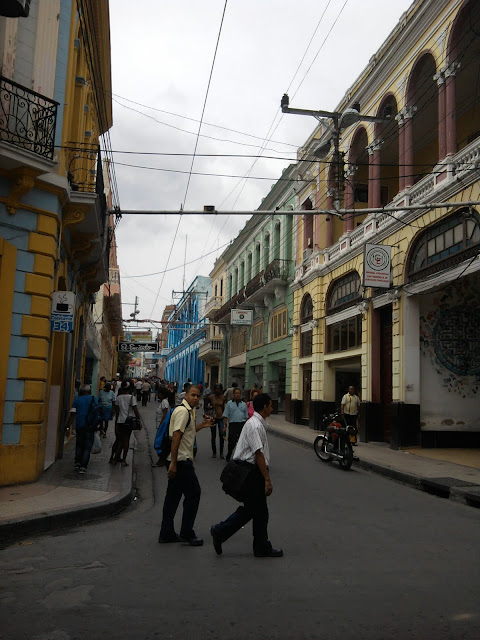 This was our destination and the final leg of our journey. After seeing the Church in El Cobre we headed back to Santiago to look for our Casa. We had been given the address by our host in Baracoa and directions how to get there but it still took us a while. Not only were there few street signs but our street had two names! Anyway, eventually we found it.  It was only a short walk away from the centre on San Felix (aka Hartmann) no 306. The Casa has the Doubleroo seal of approval. 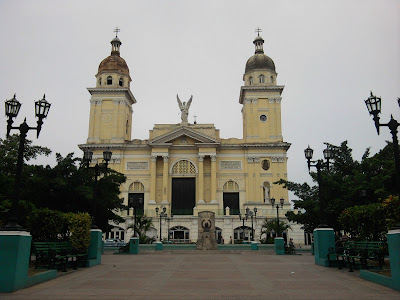 The central park with it's impressive church is a good place to start. The Casa de la Musica is around the corner as are many Bars like this one. 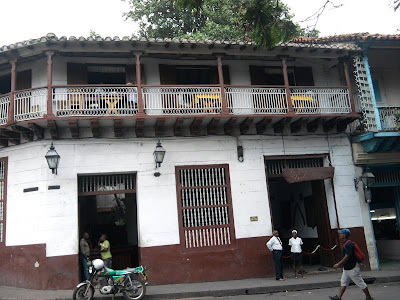 Everywhere you will find live music, food (average) and in this one, Hatuey beer. 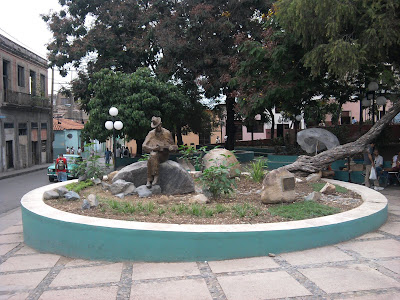 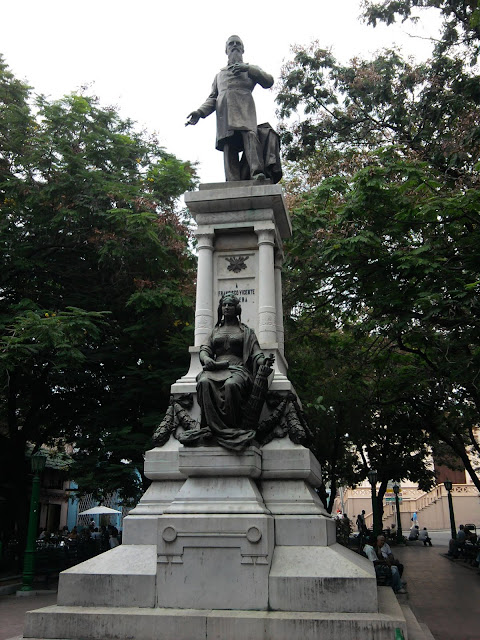 Another little park. At night lots of cafe's and restaurants beckon but expect to be "friended" by lots of tourist hunters. A nice "no thanks" is usually enough although some can be persistent.
The Moncada Barracks 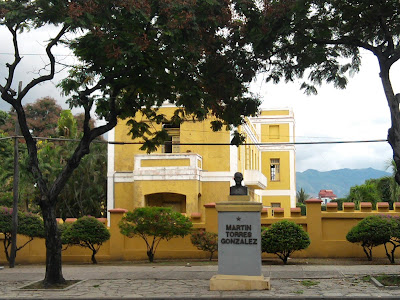 are a must-see attraction of Santiago de Cuba. This is where Fidel Castro made his first attempt to overthrow the Batista dictatorship. It was very short-lived, badly planned and incompetently carried out. Fidel was lucky to escape with his life, even luckier not to be executed and ridiculously lucky to be released after serving just a fraction of his sentence. This debacle has been elevated to a heroic saga just like Gallipoli has been in Australian folklore. Fidel obviously learned some important lessons from this attempt and as we all know his next go was more successful. He did have a chess player (Che) with him when he returned from Mexico. 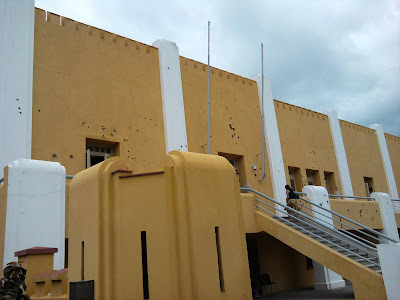 The holes in the wall were recreated. The Batista regime removed them but after the revolution they were put back. 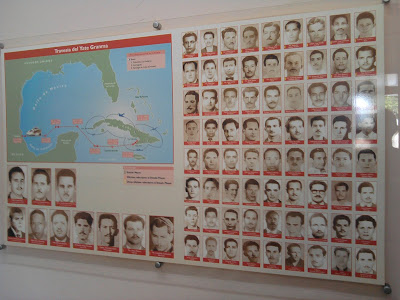 Only a handful of rebels were killed in the initial assault but many more were executed later. Here they are remembered. 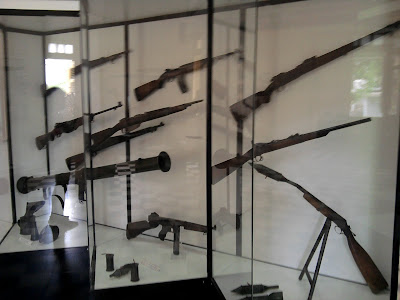 Some of the weapons used. 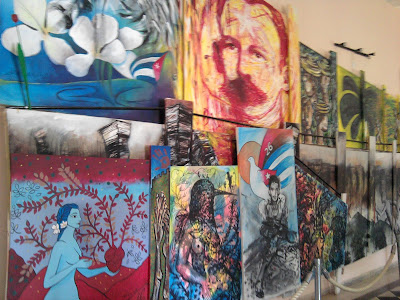 Art plays a prominent role in Cuban culture. Santiago and the east in general was instrumental in all Cuban resistance movements starting with Hatuey's native uprising a bit north and the first independence from Spain movements early in the 16th century until Jose Marti's battles at the beginning of the 20th century. It was here that the Americans intervened to finally kick the Spaniards out. Finally the Granma  brought Fidel and his troop to the Playa las Colorados. Santiago is proud of it's music, art and revolutionary history.
Castillo de San Pedro de la Roca
is the other must see attraction of Santiago. It is the most impressive fortification I have ever seen and was the largest in the southern hemisphere in it's time. 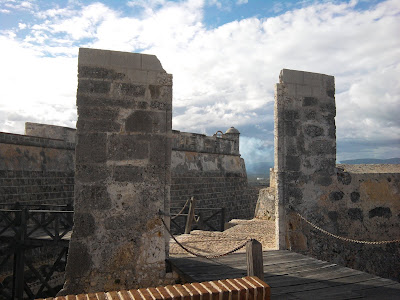 The entrance over a drawbridge 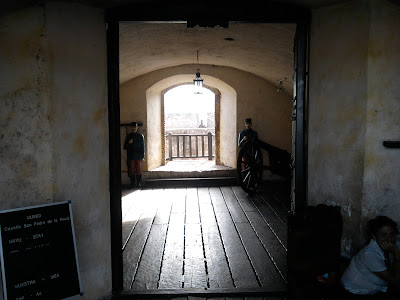 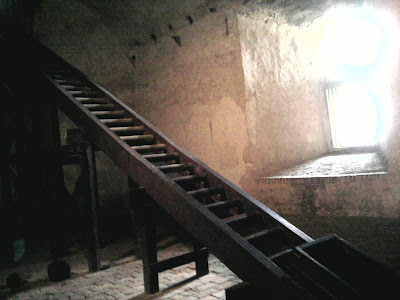 This contraption was used to ferry cannonballs to the cannons and was the cutting edge of technology in it's time. 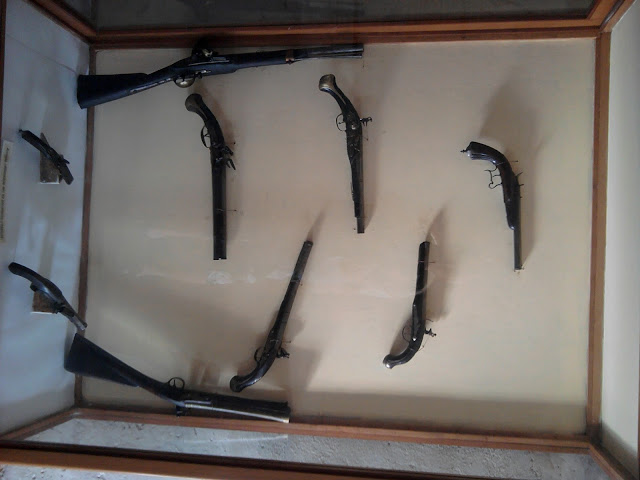 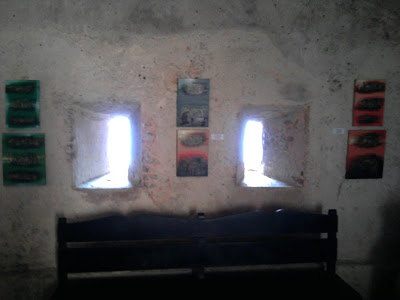 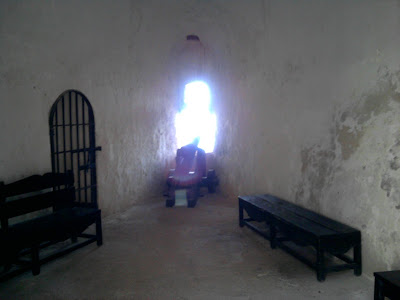 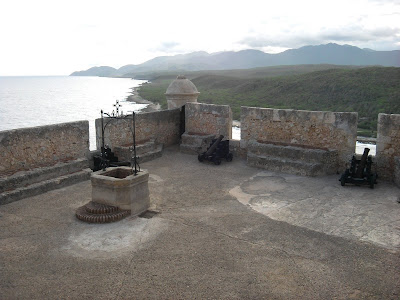 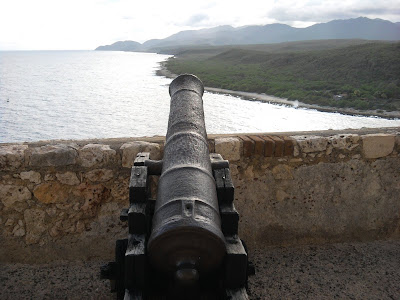 From this vantage point they hoped to sink pirate vessels trying to plunder Santiago. 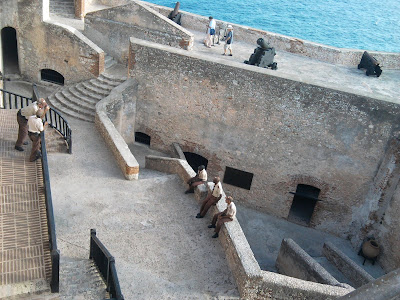 Lots of security guards, few tourists. This is a story which repeated itself throughout Cuba. While the bars and beaches were full, the cultural attractions were nearly empty despite being well kept, free or almost free and well staffed. 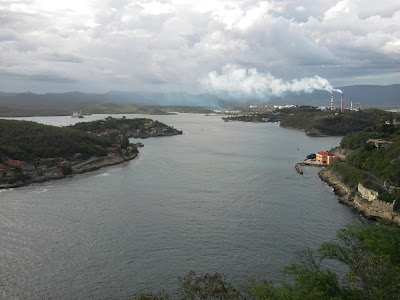 We also enjoyed a great view of the city. Lastly, every evening a group of young cadets fires a cannon ceremonially and lowers the Cuban flag. Here they are arriving. 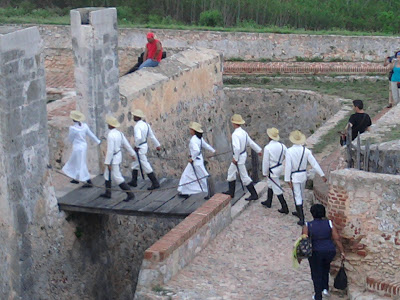 I made a Video of the event but a warning. It is long so unless you can spare 12 minutes watching nothing much.....
This was our last major sightseeing event. The next morning we headed back to Havana via Bayamo and Santa Clara but took few photo's and did little sightseeing. After 6 weeks in Cuba we were quite exhausted
and although we had a great time we were ready to head back to Europe. I personally missed internet, clean bathrooms and a cooler climate. If you are not used to the tropics it can be quite tiring after a while. In Havana we returned the Car and were told that the spare tire was missing! Remember the insurance? Well after some discussion they asked us to sign for it plus a fine for not doing a dubious warranty checkup but finally it seems they were too incompetent to actually charge it. This is the last installment of the road trip but I have one more story about Cuba to tell! Stay tuned for this highlight. Tomorrow morning I am heading to France to play in a chess tournament, the famous wine tournament so soon you will have chess games to follow again. G'nite all <3
Posted by doubleroo at 15:54