And in fact two Belgians, Tom Piceu and Thibault Maenhout were leading with 6.5/8 (with Vincent David) and faced off on board one, but not for very long. As soon as board 2 was drawn, meaning at least a tie for 1st, they drew as well. I cannot give you a complete list of results because they are still not on the official website a day later. Although I have experienced similar things in Latin countries before this time I will give the organizers the benefit of the doubt. the Internet was not working anywhere in Condom the last three days, therefore no post. I spent the morning prior to the 7th round and the Gascony feast walking around taking in the sights. I spent a while talking to this Goose which goes to show how wonderfully my mind was working. 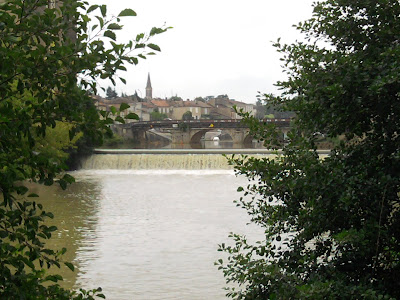 Magical no? Well I was in that kind of mood. Talking to Geese, finding beauty in everything and walking lightly along the ancient streets of this picturesque town. 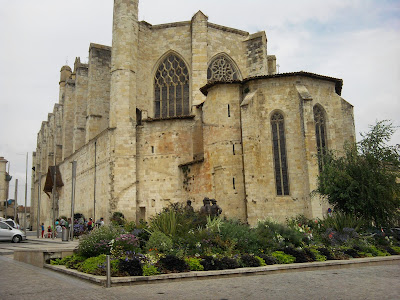 And then there was the impressive Church to visit.
Now serious chess players (if any are reading this) will be asking themselves why I was spending the day walking around soaking in the atmosphere and taking pictures instead of preparing for an important game with black against a strong opponent? Well because during the tournament I had been reading a great book about Angels and signs. That morning on my way to the shower I found a scoresheet between two players unknown to me featuring the Alekhine's defense, my first opening "love". Black won. I took this as a sign that instead of preparing for my opponent I should enjoy the beautiful morning and just play the Alekhine! Look what happened.

Anyway, not being one to dwell I soon saw the humour of the entire brainfart I had experienced all day. It was time to get ready for the feast. Francoise and Nina arrived shortly after my game had finished and the game was forgotten. The Band, Los Valencianos arrived and the Music started Here is Nina's first Dance Video.

After the Music we were served the first course, local Melon, followed by a assortment of cold Duck cuts. 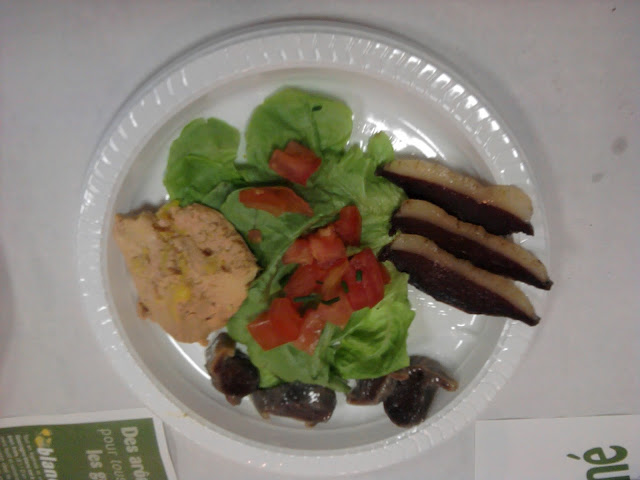 Between every course the band played, there was singing , dancing, drinking, standing on tables, more drinking, running around the tables and much more drinking. 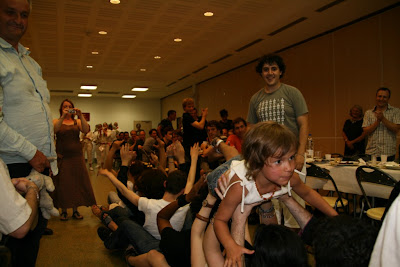 Nina was only too happy to participate in the games.
Then came the birthday cake. This year was the 10th edition of the Condom open and the 30th anniversary of the Chess Club. 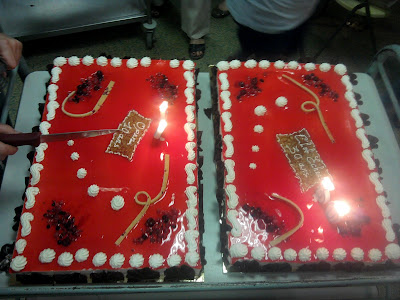 Next day I had white again and made it 4/4 but it must be said that I got all my +2200 opponents with black.

Now the infamous last round. I have had many unfortunate last rounds in the last few years and one reason, I'm sure is that I don't like to play in the morning. Added to that the need to check out of the boarding school at 9am and the noise the night before, as was habit every night, from the huge crowd of younger players who partied with regularity until 4am, this was not ideal preparation. I was paired against my friend from Munich Ludwig Deglmann. My worst game since...... the last round in Condom a few years ago where I lost in the last round in only 15 moves! Perhaps I should avoid this tournament.

So what do I learn from this disastrous tournament? A few things maybe. Work on my black openings? Don't play tournaments with morning and or double rounds? Don't mix family holiday with Chess? Less sightseeing?
All of the above. It would be nice to be able to draw definite conclusions but I can think of examples in my career where I did some or all of the above and it worked out well. So I am left as clueless as usual :-)

The only thing I can tell you with certainty is that if you spend your time at the board and focus on the game while you are playing it , it helps...usually.

ps: The final results have gone up on the official website