Before we get to the games I would like to announce that Doubleroo is going to be presenting a new award. It will be called the "Wonderful Human Being" award for incredible kindness to me. Instead of useless tin medals, wine or chocolate will be presented.

The first winner is Kaye Duncan, co-owner of the Carmel Court Motel. Because of the tight schedule, long games and rainy weather I had trouble finding the time to do my washing. Kaye kindly offered to help. I put it in the machine before leaving and when I got back it was in our flat, all dry. Thanks Kaye, your wine is on its way :-) 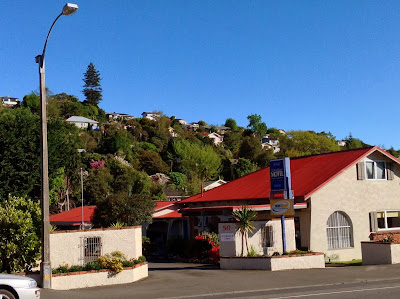 So, on to the games. The match of the day was Steven Solomons game against Puchen Wang. It was a Gruenfeld where black snaffles the a2 pawn. White seemed to get all his pieces on perfect squares but black somehow managed to defend. Unfortunately the game is not available. I am curious what happened.

As for me, I played the other Rains brother, Edward. These boys have a lot of talent and great concentration but it seems they are not getting the training they need in Christchurch. I won a pawn in the opening and despite blundering it back white was always well on top. One funny moment occurred on move 26, where I had intended and nearly played Ra6, only noticing just before moving that Rb1 wins a rook instead of a pawn. That might have saved at least an hour!

So now it was time to again meet my "eternal opponent" as Kasparov once described Karpov. I was still smarting from the thrashing Steven gave me in Auckland and was eager for revenge. Be that as it may, I got nothing or slightly less from the opening but got a nice tactical shot in with 28.Bg4. The ending was played awfully by both sides according to my engine { Stockfish } and I agree completely. But we are mere humans playing our second game of the day with little time on the clock. I made the second last mistake. The last one was 48...Bd4. Bc3 draws easily.