There was not a lot of time between rounds so we just went to a beach we had not seen before, Carcans. It is quite  a nice little town and close to Bordeaux but the parking area is a long way to the beach. Montalivet is still my favourite. With Le Pn Sec a close second. Nowthat the schedule is going to be a lot friendlier I plan to show you more of those two weather permitting. 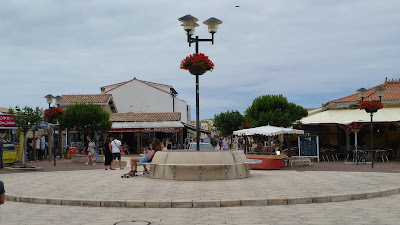 It is a good 15 minute hike over the dunes to this point. Nina was itching to go in the water and led the way. We only had about half an hour to swim before we had to go back for the afternoon round. 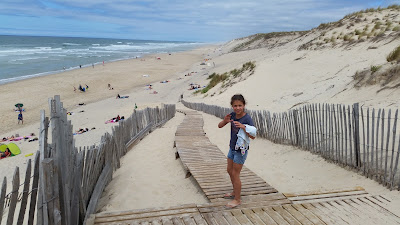 I am not a fan of morning rounds and meeting the top seed doesn't usually improve the day...unless one wins :-)

Paul Velten outrated the next three contenders by more than 100 rating points and was the clear favourite. He rattled off the opening moves without any hesitation, following my game with Moulthun Ly from the Churchie international until move six when he "improved" with 6...g6. I still don't quite get it as I played exactly the same plan, kept a slight edge (space) until he blundered badly with 25...f6 and lost shortly after.

Anyway, I am sure that I am misunderstanding something about the position but will wait until someone shows me.

This was just a walk in the park. I prefer black by move six and by move ten...well judge for yourself. Looks lost to me. It got progressively worse and by move 19 my opponent just didn't feel like playing any more. Don't blame him.


AFter the game some friends came for a few drinks and it is now after midnight so you'll excuse me I'm sure if I get some sleep. Francoise and I plan to go looking for mushrooms tomorrow morning as the round starts at four in the afternoon, A demain :-)
Posted by doubleroo at 15:46