GM David Smerdon is going to represent Australia at the Chess Olympiad in Istanbul on board one. I am proud to say he is also a former student of mine. Disclaimer: I am not taking credit for his achievements. He would have become a GM anyway due to his interest in the game and great work ethic. I did however enjoy our sessions on the Gold Coast in the 90's.

Not only is David a great chess-player but also a gifted writer. This has been recognised by Chessvibes, who gave him a spot on their very popular website. His latest post mirrors my opinion on the current World Chess Championship  in a very entertaining way. Although written after game 9 nothing has changed since.

The post game press conferences were hilarious. Boris looks like somebody with kidney-stones as he testily answers questions about why the match is so boring while Vishy is practising for a career in politics judging by his replies. (depends on what your definition of "is"is) [William Jefferson Clinton]
Most of the questions are about the validity and value of the match and the high percentage of boring draws not seen since Kramnik-Leko.

Oh yeh, 6-6 and now we will see some rapid games and then we will have a winner. I don't really care any more.  It has been a long time since the strongest player was the World Champion and we have to go back to Topalov to find one who played entertaining Chess.

Who is at fault? I blame first and foremost FIDE, followed by Kasparov and to a much lessor extent Short. FIDE for changing a great system, Kasparov for privatising the title. Next he "chose" his next opponent after Short. Some organisation he formed organised a candidate selection process. Everything was going according to plan until Alexei Shirov crushed Vladimir Kramnik in the final. Kasparov then refused to play Shirov and a year later played his preferred opponent Kramnik anyway! Well then as we all know he lost to Kramnik and Vlad was smart enough not to give him a re-match. The best laid plans...

Alexei was cheated out of his chance and Kramnik went on to defend the title against Leko and Topalov finally succumbing to Anand. This is what Alexei did to Vlad in the last game of their match.

Why Nigel? Well he went along with Garry but who can blame him too much? It was a big pay-day.

Enough ranting for now, we'll just have to wait for the next big tournament to see the best players play. 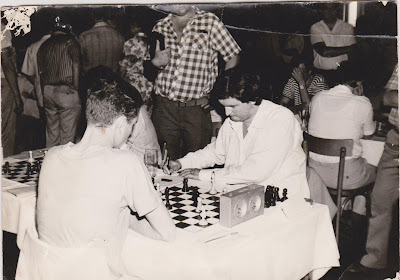