George Trundle Masters and the winner is.... 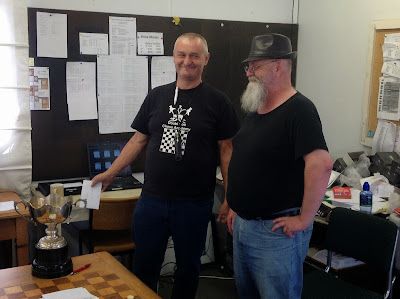 Me !!!
I must admit it was not a heroic epic struggle that secured this victory but rather an insipid quick draw. I have had too many last round disasters in the past and the round was changed from the civilised time of 1.pm to before the crack of noon so I took the "professional" {spineless}  approach. After all, Steven still had to win to catch me and he failed to do so. Paul Garbett proved to be a bony chicken today. 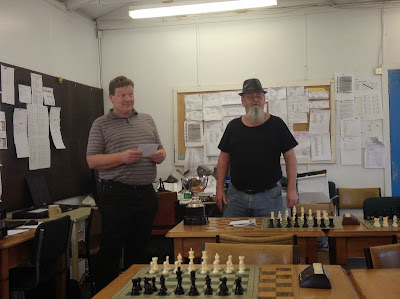 Second on 6 points was my countryman Steven Solomon who gave me two points start and nearly caught up, falling just half a point short. 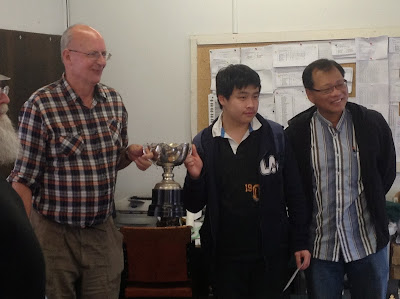 Our Arbiter Keong Ang is worth more than a passing mention . His primary concern throughout the tournament was that things ran smoothly and that everybody was happy.Mission accomplished. His son Alphaeus played in the challengers. What a great name! I have never heard it before but if I have a son I will name him Alphaeus.

All the people involved did their best to make the tournament a success and the visitors feel welcome. My host Bruce Watson opened his home to Steven and I and the Auckland chess club members entertained us and went out of their way to make us feel welcome.

Lastly I would like to mention the contribution of Helen Milligan. A link will tell you more than my rambling
http://www.newzealandchess.co.nz/results.html

Look! Results, pictures, upcoming events, past events, games, links, etc, etc. This is a website. Now compare that to the Australian chess federation website.
http://auschess.org.au/acf/
But if you have been in the last few months, don't bother. There is still nothing there. It is better to have nothing than this disgrace. I promised a review a while ago but there is nothing to review! It is even worse than the previous disgrace. I did not think it possible!! Am I being too harsh? Please tell me if I am.

A notice to the ACF. I have been on about this for over two years now. At the Australian Championship in 2012 I even offered to do it myself {with the help of Isage internet}. Gary Wastell consulted with the council and rejected my offer.
I will increase the frequency, range and volume of  my criticism until something is finally done. As an Australian chess player I am embarrassed by what is up on the web now. You have been warned.
_______

I would like to show you one final picture just as a historical curiosity. Just around the corner on Dominion Road there is a building which housed the Auckland chess club sometime in the 60's 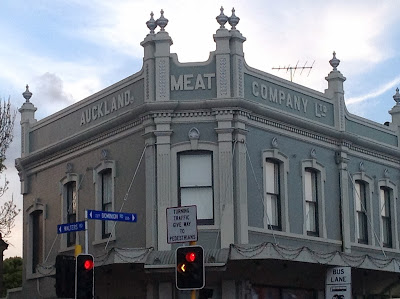 Why am I sharing this with you? No particular reason, I just like the building :-)

Tomorrow morning I am giving lessons at the Auckland Chess Centre to a group of promising juniors, followed by a simultaneous exhibition in the evening. Since several of the players from the qualifiers are playing and even one from the masters has threatened to play { to get revenge } I anticipate a tough evening :-/

Good night folks, thanks for reading and come back for the reports from Nelson.
Ciao Bellas/Bellos
Alex