As the tournament draws to a close the fighting spirit is declining. My opponent played the opening at lightning chess pace and I threw the kitchen sink...just because it might be fun. Now If I had played the originally intended 18.Be5 I would have had a positional edge but that wasn't enough for me so I came up with some convoluted plan that achieved nothing except a bad ending. Luckily Medina had somewhere to be and offered me a draw. 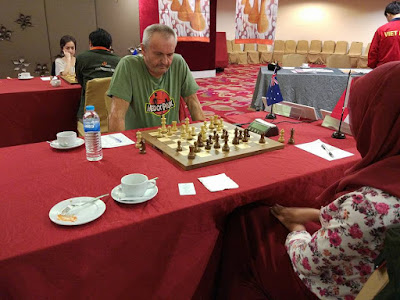 One more round to go. Luckily it's at 2.30pm because of a party in the Ballroom or something similar. Am definitely too old for two rounds a day including 9am morning rounds.

Two lads have already made IM norms and some others are still in play I think but I'll link to the final report tomorrow.