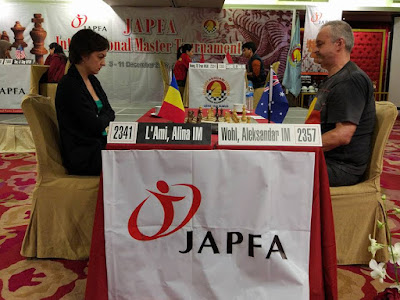 I spent most of the morning looking at Alina's games. I noticed that she had played an amazing amount of strong players with good results including a wins against players like Nigel Short to just mention one. Her repertoire is solid, she calculates well and is extremely aggressive. I did notice though that she had some losses against weaker players which explains her rating.

In that way we are similar, running hot and cold depending on form. It was pointless trying to take her on in her usual defences since she seems to know a lot more about opening than I do so I just decided to play a solid English so as not to blow my own brains out.

I couldn't resist sacking a pawn with 11.Bh6, feeling sure that she couldn't and wouldn't take it and didn't want to waste a tempo defending it. She did take it though and her feeling was right as stockfish just confirmed. 13...cd3 leads to an unclear position but Alina played Re8 instead and after white's attack is unstoppable.


So another four rounds in two days. These events are no picnic.
Hasta Manjana Commandante...
Posted by doubleroo at 05:08