The Sunday Edition Featuring a "who's mentioning me now" segment + Food Glue rant.

Who is mentioning me now? Kevin Casey! That's who. 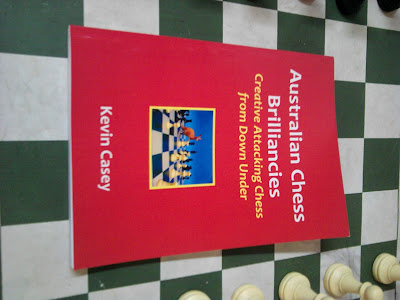 Queenslander Kevin Casey  put together a collection of Australian brilliancies a couple of years ago and hearing I was in town sent me two. I guess one for each personality :)
My first ever chess book, for which I by now owe Sydney Boys High Library a huge overdue fee, was "Russians play chess" by Chernev. It was a collection of Russian and Soviet games with emphasis on spectacular sacrifices. It really inspired me as a beginner. Kevin's book is similar.His introduction was a brilliant way to introduce himself to the audience as a chessplayer. Nice touch.
Only 29 games can only give a snapshot and I am sure there must have been many other entertaining games played especially prewar. No Steiner game made the cut? Well maybe if lots of people buy this book the author might publish "Australian Chess Brilliancies 2"
One of my games did however make the cut and this is a good an excuse as any to show it to you.
If you want a copy send $22.95 AUD (19.95 +3.00 p+h) to

Kevin didn't mention anything about international orders so if you are not ordering from Australia just send an email to  kimpub@bigpond.net.au

And now for my Meat Glue Rant

I have been checking Kevin Spraggett's blog frequently of late. There is always something interesting to read but his "Consumer tip" last week has had me fuming since I read it. The Clip Kevin links to is about meat glue, transglutaminase, a substance I had not heard of before. But I have eaten it before and unless you are a vegetarian, so have you. I find that disturbing. First I find out there is an acceptable level of fecal matter in mince and now I am told my fillet is chunks of blade steak glued together by pigs blood!
Would it not be just if those who now profit through this practice could redeem their reward only in the product they produce and could eat only thereof ?  Until my recommendation is implemented other sources of nutrition have to be found. 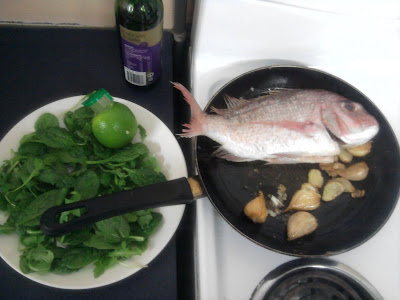 Nice? Local Snapper with organic garlic on aromatic leaves with Lime juice (see the "Clever Dick"?) and Australian Olive Oil.  I'd like to see them try gluing a Snapper like this together!
Concert for Japan
There were too many things to choose from on Saturday. After a swim at Wategoes beach 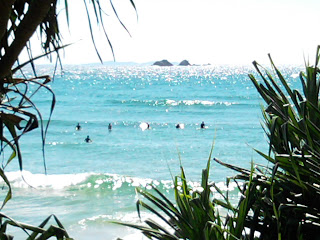 ( he-he, any excuse for a beach pic) I drove to Durrumbul hall, Mullumbimby for the all-day concert. My favourites were the Japanese Drums. Sorry about the picture but you get the mood I hope.
Channon Sunday
Once a month on the second Sunday the little town of the Channon hosts the Craft Market.  Of all the market venues this one is the "greenest" and most pleasant to walk around. the drums were just starting up as we were leaving. 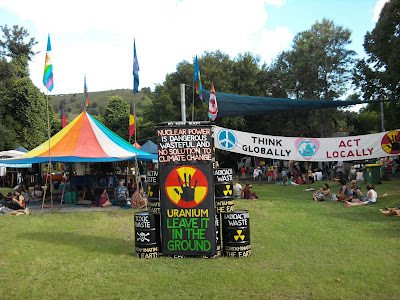 I snapped these on the way home 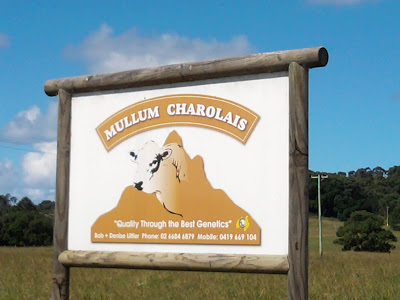 and am including them here 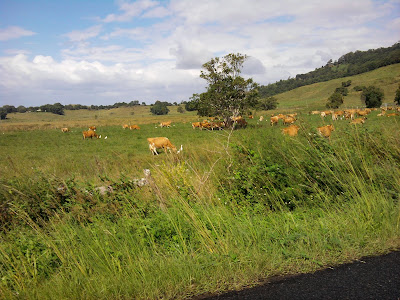 for no particular reason  :-)
Have a nice week every body!