Today was the dreaded double round day and I was paired against dangerous underrated Indian juniors. Luckily I was able to start the day with breakfast at the Cafe Nosh, pictured below. All the food is superb, Indian and Western, with one exception. The coffee. Is it not possible to get a machine like every 7/11 and McDonald's has got? I shouldn't whinge, it's just strange that a hotel of such extraordinary standard can't make even an ordinary coffee. 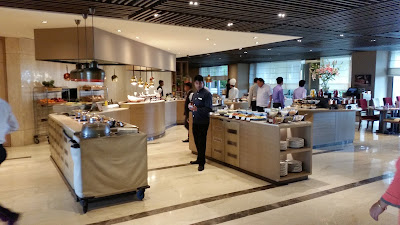 Now to my second game. During the short break I looked up my opponent on
Chess-db and saw that there were 21 players listed called Gaurav Kumar. Thankfully there are FIDE id's. My young opponent had beaten GM Rahman in the first round and scored two draws and a win since then, performing at 2520. I was fairly nervous before the game and seeing he was very tactical I chose a quiet line of the Ponziani to confuse and provoke him. If anything, I was a bit too cautious later, opting for a pawn up ending instead of many different wins but I was chastened by my loss by exuberance yesterday. Pawn up endings are definitely the way to go ☺

So the home stretch now. I have survived the piranhas and must now run the gauntlet of titled players. Now I must leave you and prepare for WGM Bhakti Kulkarni. Thanks for reading ☺
Posted by doubleroo at 09:57