Well today was almost a replay of yesterday except I was on the winning side. My opponent spent a long time in the opening, lost a pawn and had minutes left for the final moves. Anyway, last game for 2011, see you all in 2012, the year of the Rapture :-)

Posted by doubleroo at 20:39 No comments:

I have to apologise for my horrible game today. My main excuse is time management. I again failed to guess my opponents first move. I was expecting a Sicilian and had spend many hours preparing. Time better spent at the beach. I only found what I wanted to play ten minutes before the game :-)

Well that led me to thinking about twenty minutes about my second move. Not smart especially since I played the main line. By the time we got to move 10, a position I still knew I was down to half an hour. On move 13 I had about ten minutes left and had to choose between two critical moves fe6 and Nd4. I looked at my clock, tossed a coin and chose the wrong one. 13.Nd4 is advantage white with a dangerous attack and 13. fe6 is a pawn down with little compensation. After move 20 It became a bit of a comedy. What to do if all your pieces are on good squares but there is no way to make progress and only minutes on the clock? Move them to bad squares and then lose them all of course!

So today's lesson was how NOT to play chess. Now that you have absorbed that I don't need to show it to you again for the rest of the tournament. Anyway, it's a nice day and there are plenty of rounds left.

Posted by doubleroo at 21:44 No comments:

How lucky was I today? The opening went rather well for me I thought but a careless move 16....Nb6 landed me in very hot water indeed. Not willing to swallow my pride I compounded it on move 20...c4. The alternative was a pawn down ending but I preferred an "attack". In my mind only. If Moulthun had played 28 hg3 the game would have been over very quickly.

It is an absolute miracle I survived especially as the noise from the analysis area was deafening. On move 43 I even allowed myself to decline a draw offer as I felt I still had some chances seeing 43 Rc1 was not played. And again no tourism due to preparation. Yesterday I was out on move two whereas today I failed to predict my opponents first (!) move. Oh well.

I need to make special mention of IM Leonid Sandler who is presumably not playing because we are all too weak. Instead he is involved in the organisation of the event and doing some interviews including this one

with yours truly. Please take my answers with a grain of salt. I had just won my eleventh game in a row and was feeling a bit light headed.

1pm is not a bad starting time but if you are a late sleeper it is not easy to do any tourism. Sorry. I was also playing the Victorian state champion so I felt I needed to prepare. Dusan has a very well worked out opening repertoire so I wasted the whole morning trying to find a good line against the Sicilian or Kings Indian. In the end I thought of a tricky move order in the hope he would play 1.Nf3 c5 2. b3 Nf6 3. Bb2 g6 4. Bf6! gf6 5.c4 with a position like my game against Rogozenko with colours reversed. As you can see I was out of my brilliant preparation on move 2 :-(

So I got nothing out of the opening until Dusan got a rush of blood to the head and played 17....Nd4. After that it was just a matter of technique. The rook ending is just lost when he walked into a mate in 1.

Happy Holidays friends! I hope you have all spent Christmas day with family, friends and loved ones. I took advantage of the cheap flights and flew to Sydney on an almost empty plane. I spent the night at the Ingram family Manor and jumped into Ben's luxurious Saab the next morning for the drive down to Geelong. 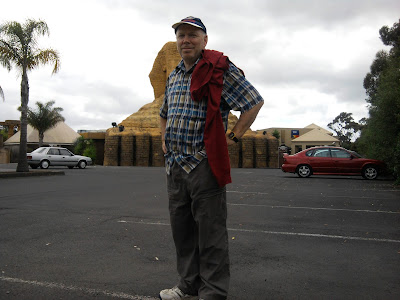 Ben obscuring the Sphinx. This is the Venue.

Geelong is composed of many lane highways, housing estates and industrial areas. Luckily it also has a historic old town and a beautiful bay. 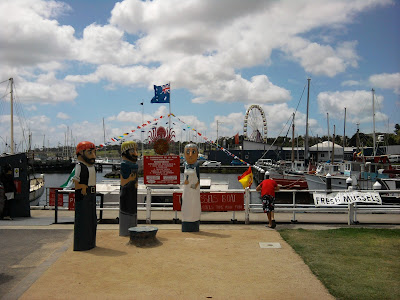 We will be here for two weeks and I hope we will have time to do some tourism between rounds so that I can show you some pictures of the area as well as games.

The tournament got underway at 2pm. Ben and I got "lost" and unfortunately missed the opening ceremony and the undoubtedly riveting speeches. You can find all the information on the tournament at the Geelong chess clubs website and if you are clever enough you can also find the link to the five live boards. The top seed GM Zong Yuan Zhao proved that e4 is the best move as he needed no other to win the first round. Another strange result was Darryl Johansen's  14 move draw with white. Another mystery is the participation of an Indian International master. I assume we must now have a reciprocal arrangement with India and will therefore be applying for the next Indian closed Championship.

My game today started well but I lost the thread a bit in the middle-game. I did enjoy the exchange sacrifice. Black has no material for it but I cannot find a way to defend white's position.

Party Party Party
That's life in the shire. Weekends especially one has a wide choice of events and Party's but yesterday my Bro was playing so my choice was obvious. Mono is a local celebrity. The Nickname was given to him apparently due to the fact that he only has one leg. This did not stop him from dancing and having a great time. There were a few bands, loads of Grog and great food.

Bro is the Guitarist with the red and white guitar.

Posted by doubleroo at 19:20 No comments:

Last night, following the strong recommendation of a fellow Mullum chessplayer and friend Justin, I went to Coorabell Hall to listen to some music. Wow! First up was the sultry and funny  Ivy Lucille. She was accompanied by a guy on what I think is a double-bass. Is that what one calls the really big ones? I did take some videos but am now in Brunswick heads and the internet connection here sucks and after trying to upload the Videos for several hours I gave up, Luckily she has this terrific clip on Youtube.

I must have arrived half way through her gig because after about half a dozen songs, far too few, it was over and I went outside to chat with some friends. We were just discussing how terrific she was when Ivy herself appeared and was kind enough to answer some questions for her fans. She does not have a CD out yet but it is in the works. Doubleroo will continue to "stalk" her and bring you updates. Bad Videos when I get to a better internet connection.

Rapskallion was up next and the Hall filled up immediately. Now there were eight great musicians on stage and soon the whole hall was shaking. Again, my own Vids another time but here is a Youtube sample.

Lucille showed herself to be a real party girl by staying for the whole performance livening up the dance-floor as much as anyone despite having just done an entire set herself. Rapskallion were brought back to the stage for three encores, usually far too much but in this case not nearly enough. They are touring to promote their new album which I just had to buy. I have now listened to it and recommend it highly.

Undoubtedly the best night of music since Chocolate in Cuba. The difference being that although I loved the live performance in Baracoa I did not like the recorded stuff.

Tonight I will treat myself to more music, this time my brother is playing at a party in Mullum and I will take some Videos again. Life in the Shire is just wonderful :-)
Posted by doubleroo at 00:10 No comments:

The tournament finishes on Tuesday but since I played my last round game in advance I have already played all 9 games, and scored 9 points :-) Ok, I will admit that it was a bit like shooting fish in a barrel but I did have 2 tough games. This was not one of them. Oleg got a bit too aggro and by the time he hung a piece his position was a shambles not to mention the pawn.

Gene was always going to be the main competitor but a couple of draws put him a point behind so he would have had to win this game to draw level. It was therefore quite silly of me to sacrifice a pawn and offer another for a nebulous attack. Luckily the pressure was enough and I was even able to pass the final test, winning rook v rook + 2 connected pawns. I have not really been paying attention to the rest of the tournament but if you are interested here is the link.

I can honestly say that my young opponent played like a grandmaster this evening. Exactly like a particular grandmaster in fact. If you look at my second round game from Naujac sur Mer this year you will see GM Dorian Rogozenko making the same mistake (not playing 5. d4 ) and suffering the same fate. Also neither player resigned too early.