Peter Parr was the first adult chess player that I met, way back in 1978. Livio Borghi had taught me the moves a few months before at Sydney Boys High and when he asked if I wanted to come along to the chess centre { Sussex street } I enthusiastically agreed. Peter was behind the counter taking entries for the State Championship supporting events. I entered the reserves. 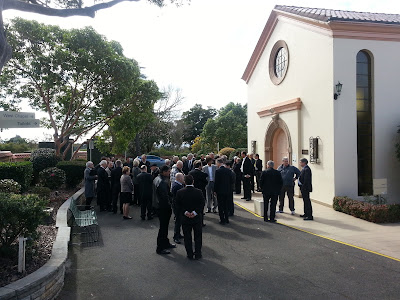 The Chapel was too small to seat all the people who came to pay their respects. These are some of the people after the service. We exchanged memories for much longer than the service went for and then adjourned to the cafe where we were asked if we were from "the funeral". Everybody was wondering who had organised the buffet breakfast. The Greek coffee's should have tipped us off. We had inadvertantly gatecrashed the wrong wake. Some of us thought Peter would have liked that :-)
We then adjourned to 72 Cambell st, the former Chess Discount Sales, which is now a wine bar and spent several more hours remembering the man who had such a huge impact on all our lives. He was many things to many people, below an incomplete list of some of the things he was to me.

Peter liked being Captain and he was good at it. His organisational skills, knowledge of the rules and common sense. He was my first Olympiad captain and I concur with Robert Jamieson that he was the best. I also played for Peters Chess Discount Sales team at various times but the details are lost in the mists of time.

Peter was a stickler for the rules. When I told him about what had happened in the last round of a Sydney of Sydney championship { i think } sometime in the 80's he immediately wrote to the N.S.W.C.A
The arbiter, Bob Theakstone, had made a mistake in the last round pairing robbing me of a chance to overtake the leader, Javier Gil and instead pairing him with his brother Marco. This contravened one of the basic principles of swiss pairings, namely that the highest ranked player must be paired up. There was no problem with colours or anything else.
Many weeks later we went before the council with Peter speaking on my behalf. He pointed out that not only the normal swiss pairing rules but all published variations would have led to the highest rated player being floated so how did the D.O.P arrive at his pairing?
Mr Theakstone invented a nice tale. He said he had a good friend whom he had met during the war and who was an arbiter and this friend had suggested a rule and he had decided to try it out in the last round :-)
Peters cross examination was brutal.

The council in its infinite wisdom decided that, since there was no clause specifically prohibiting an arbiter from using a new undislosed rule for the last round,  the arbiter had done nothing wrong but that the council will move to institute such a rule now.

Peter dubbed it "Theakstones French Letter" and decades later we would still laugh about the incident.

Another incident happened in 2005 when I tied for 1st with Ian Rogers in the Doeberl cup. The money was split and Ian was originally awarded the title. Peter noticed that no tie-break had been announced and took up my cause. He never let go, even years later. http://chesschat.org/showthread.php?t=1540&page=36
Here you can see how Peter presented a case. Methodically, factually, easy to understand with an Iron logic. He would have made a great Lawyer.
Banker
Peter always cashed checks for us chessplayers back in the day. After a successful tournament I would take my cheque and trophy to Peter. He would cash the cheque and buy the trophy, having often sold it that very morning. Peter also often extended credit when needed or kept money for safekeeping when it was not immediately needed. He kept exact records of every transaction of course.

Landlord
Chess Discount Sales was very profitable in the 80's due to Peters hard work so he had money to invest and bought a flat. He did not afford himself the luxury of living there but instead rented it out. I was one of the tenants and I have to admit that although I did pay my rent, it was not always on time. There also Peter showed patience and just gently reminded me of the outstanding amount every few weeks.

Friend
But most importantly he was a life long friend. Peter had more or less hung up his pawns by the time I started playing chess but his pedigree was impressive. He won the N.S.W championship soon after arriving in Australia and tied for 1st in a Doeberl cup. That is probably one reason why he was such a good arbiter and captain. He knew what top level chess was because he had been there. Here are some of Peters games. As you can see he worked hard at the board :-)
http://www.365chess.com/players/Peter_Parr

One of the pillars of Australian chess is gone and this one cannot be replaced. We will miss you Peter, on quite a number of levels.
Posted by doubleroo at 18:35 3 comments: