Max Illingworth beat 13 year old Anton Smirnov to take the title. It was an exciting game. The report, games and photo's can all be foun on the official site. 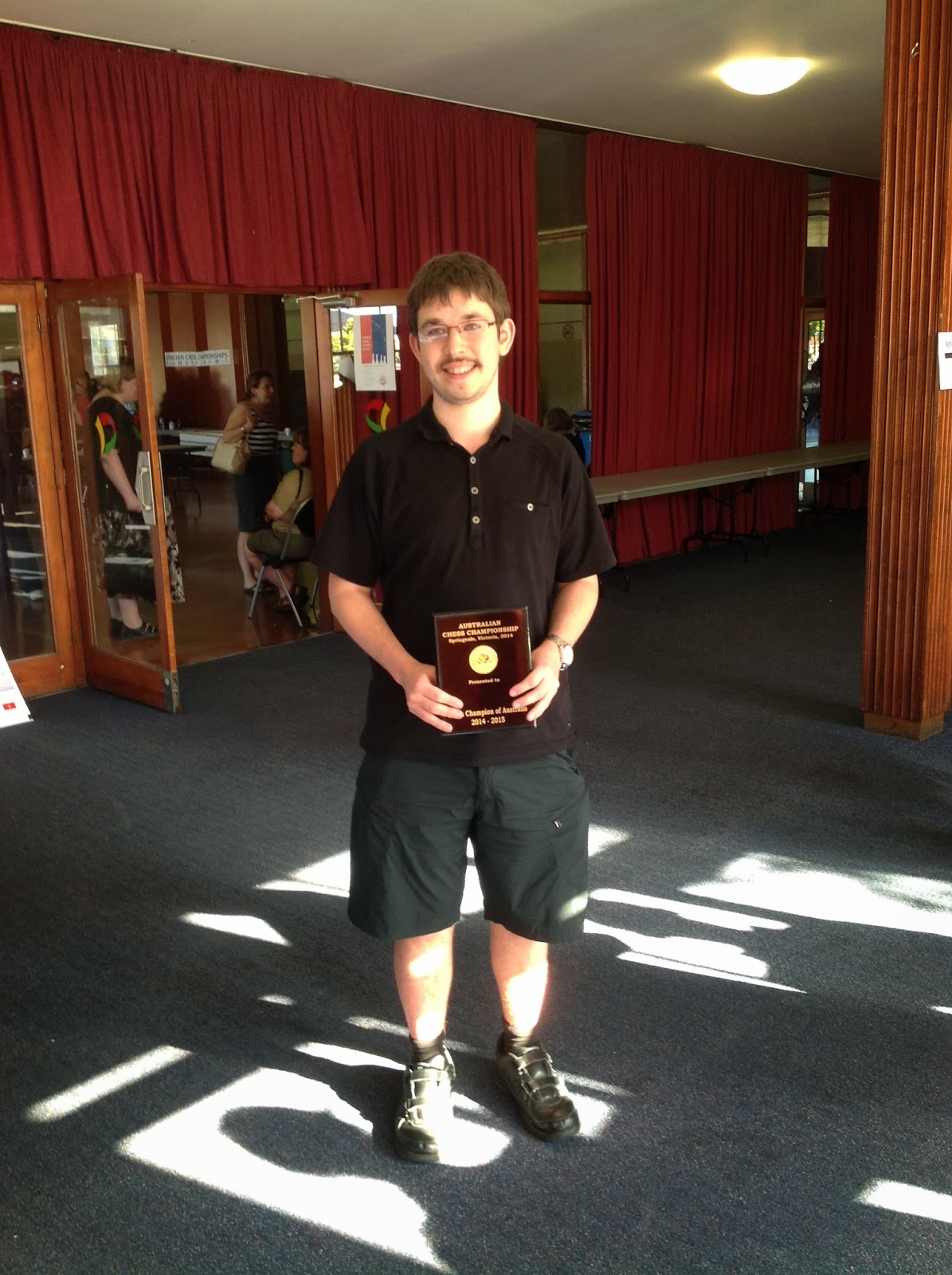 I had a relatively early draw. Being black and facing a promising junior, I didn't burn any bridges and when offered a draw in an ending that is still not clear to me I accepted. Anyway, gotta go, car is leaving for Sydney. See you soon.

I hope you enjoyed these reports, next stop, the Australian junior championships.
Posted by doubleroo at 13:08 5 comments:


There is only good news today, well from a certain perspective. I thought I would give the Ponziani a whirl today and I can't complain too much about my opening and am sure that 22.b4 would have posed black some challenges. Instead I lost pawns but surprisingly Stockfish tells me that I was worse but not actually lost. Somewhat surprising as I am two connected passed pawns down in an ending.

The Championship has turned out to be a thriller. Max Illingworth and Anton Smirnov are tied for first on 7/10 and are playing tomorrow. If there is a winner the title will be decided. Otherwise there is a pack on 6.5 who can all join a playoff by winning.

The biggest story for me this year is the sovereign performance of Dough Hamilton in the reserves. He is already home with 9.5/10!! , two points clear of the pack. Much has been written about his non-selection for the Championship. I guess in two years time his participation will not be an issue.

One more game to go. It would be nice just to spectate tomorrow. It should be an exciting round!
Posted by doubleroo at 07:20 2 comments:

Well today was one blunder too many. My first inaccuracy came on move 21. It would have been better to retreat the Knight to g8 so as to be able to defend f5 from e7. I didn't think it made a difference as I was intending to play 23....Nf6 anyway. I saw I win a rook but not that I get mated if I take it. I didn't double check so got what I deserved. Details matter

It was a day of surprises, the main ones being Max Illingworth beating GM Vasily Papin and Igor Bjelobrk inflicting Bobby Cheng's second defeat in a row on him. It's getting very tight at the top. Pity not to be amongst it :-(

Anyway, there is always the next Australian Championship, if the rumour is wrong that it is under consideration to abandon it altogether in favour of an Open every year.

Two rounds to go, damage control :-)
Posted by doubleroo at 06:14 No comments:

It has been raining or overcast until today so when we saw the sun shining in the morning we decided to do some sightseeing. The closest beach to us is about 15 minutes drive away. We drove we saw and David had some Zombie Guts. I just found out today that an ice cream goes by that name. He prefers it to the Zombie Snot. Apparently the snot is slimy. Imagine that. 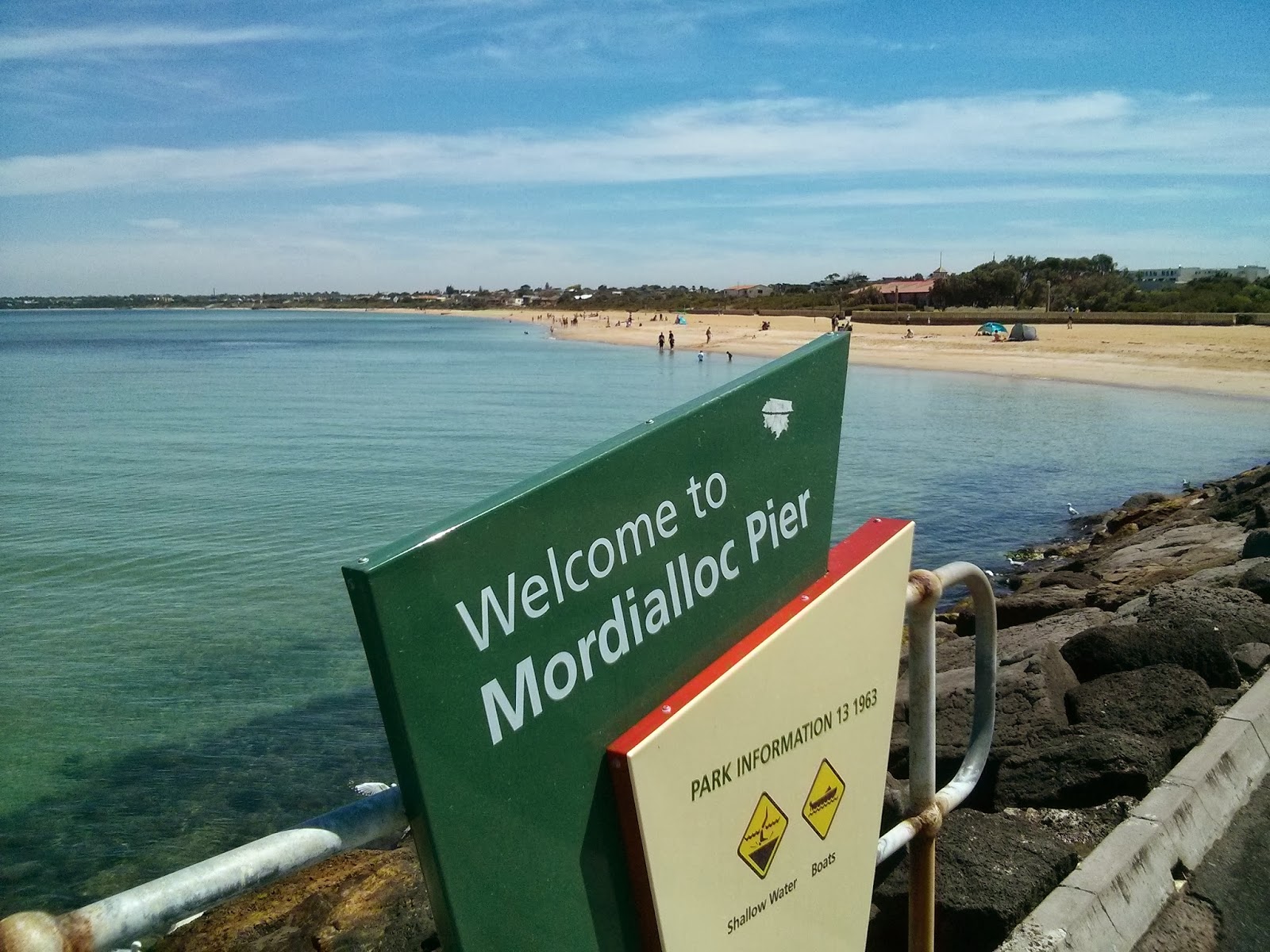 David Liu and his Grandmother below checking out the boats. 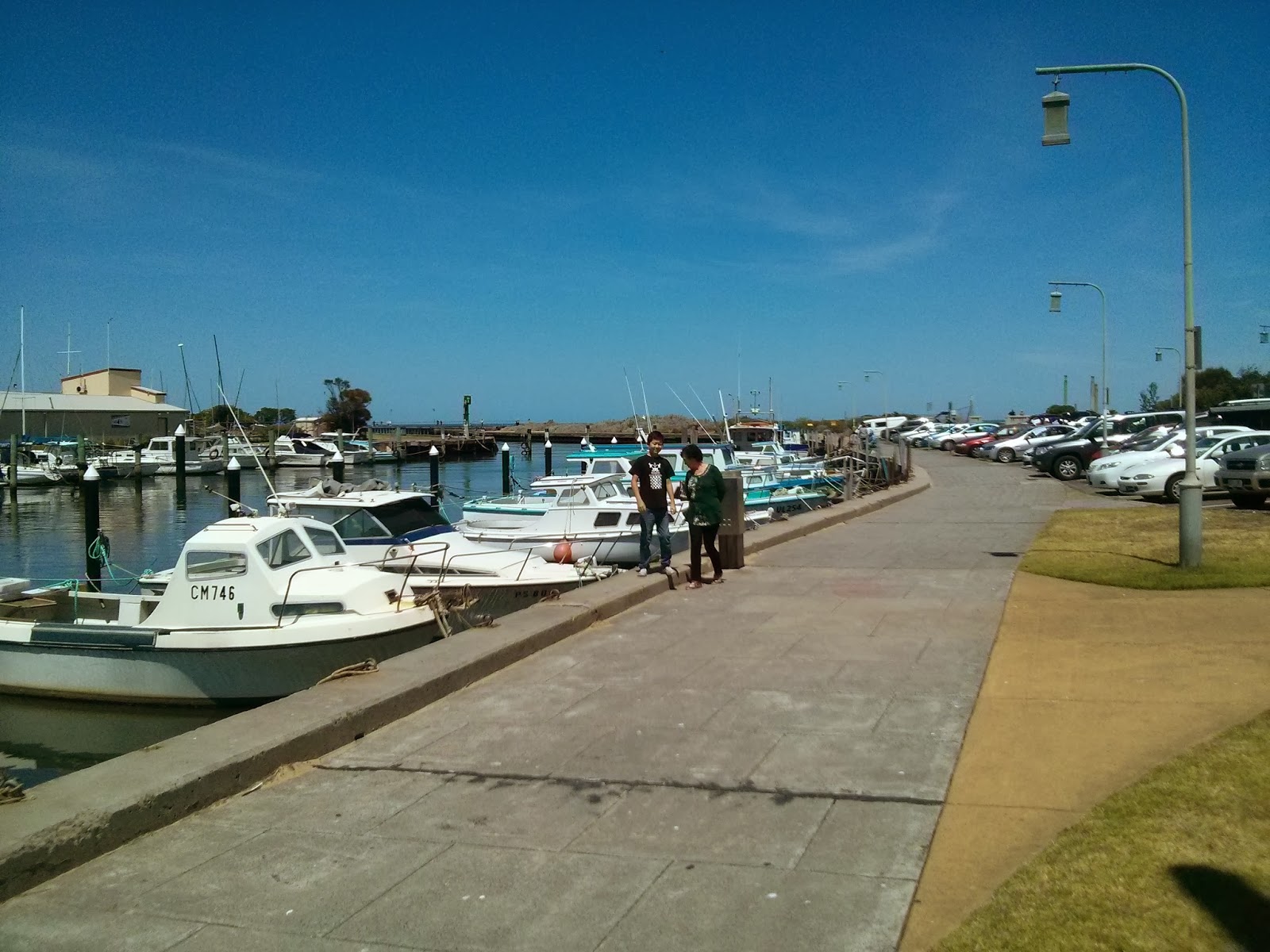 And a nice beach. 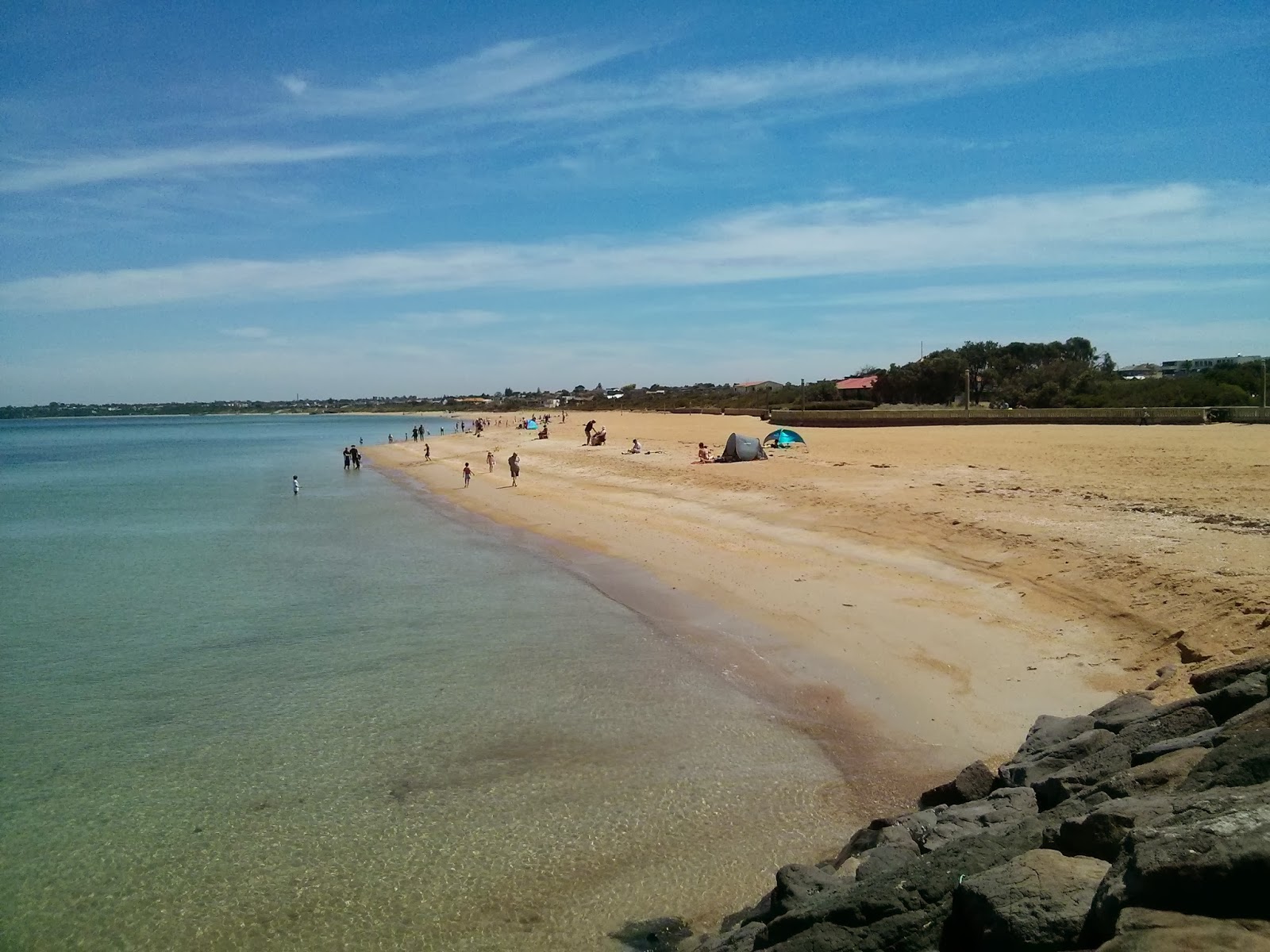 A nice place to take a relaxing walk before the game.

The game was full of drama just as our game in New Zealand a few months ago. 15.Qe4 was too "optimistic" {blunder}. Ne4 or Nh2 are normal typical KIA moves as pointed out by IM Mark Chapman. So after a long fairly forcing sequence Luke had to decide how to recapture on f7. Luke played Rbf7 while I thought Rff7 was best. During the post-mortem we  joked that the computer will tell us Kf7 is best. Well guess what. Stockfish gives Kf7.

29.Rb7 would have equalised again but instead I had to slime my way out of a pawn down ending that I feel is lost at some stage.

Bobby Cheng added to his growing list of titles by winning the Australian Lightning Championship. GM Tu Huang Thong won the tournament with  9/11 and Anton Smirnov, Brodie McClymont and Bobby Cheng tied for 2-4th with 8.5/11. They then had a playoff which Bobby won by half a point from Brodie with Anton coming third.

Four rounds to go. All is still possible. To dream, the impossible dream....
Posted by doubleroo at 02:22 6 comments:


Hippo to the rescue :-) This morning I faced my highest rated opponent so far and played my first decent game, without oversight or blunder, or rather none that I am aware of. I cannot use my engine {stockfish} anymore because my laptop keeps shutting down when I do. Time for a new one soon.

Watch the dance of the knights. I guess 12.Ne1 allowed black to take over the initiative and white never recovered. In any case whites chosen system will not put the Hippo on the endangered list.

The second game is still a mystery to me. I thought I had a clear advantage after 14 moves. Two bishops, half open files, strong pawn centre etc. Well very soon I was a bit worried. If black just retreats his rook on move 26, he should be at least fine. Zachary lost the thread around here and gave me a passed d pawn.
It went downhill from there.

Well you have probably heard of twerking recently. A girl who used to be Hannah Montana is now Miley Cyrus and has been shaking her Gluteus Minimus to the sound of music. Having seen similar activities in Cuba, I can tell you she is not doing it right.

Well, Queensland chess prodigy, International women's master Alexandra Jule has now stunned the theoreticians by inventing Twirling. Twirling is the art of slowly placing a lock of your long soft glistening hair in your finger and  seductively running it along the outside of the lock...around and around and around. This tactic has been known to paralyse the male brain, making it impossible to form coherent thought.

Alexandra's opponent only had one chance and he took it. He complained that the twirling was disturbing him and it was decided that Miss Jules hair would be tied up. Too soft on crime I say. What message does that send to all those young girls with long hair? A haircut I say!

This follows on from a story about the European Chess Union legislating on women's clothing in tournaments here are some links http://en.chessbase.com/post/che-and-cleavage-dre-code-story-in-the-media

The Cleavage Gambit is ancient theory but until recently nobody has found a refutation. The ECU has taken some steps, like mandating the length of skirts and number of buttons that may be undone {2}. It is now safer for us males to play in open tournaments. Now that twirling has been identified, regulatory authorities should move quickly before it gets out of hand.  No hair below chin should do it.

Tomorrow is the rest day and lightning championship. I will take some pictures instead :-)
Posted by doubleroo at 06:18 1 comment:

When it rains it pours. Gene has been a regular customer of mine but today he was not buying. I liked my position from the opening and tried to get too much out of the position. My first chance at a subatancial advantage came at move 12 when I should have played Bb5. This had occurred to me and I did not see a good reason for not playing it. 16.Ne4 allowed black to equalise. I then handled the position badly and then came 36.g3 is difficult to explain. Brainmelt?

To Trevor, my grapes are not sour, rather fermented, and prefer to be called Cabernet Sauvignon.

Tomorrow is the last day of double rounds. To recover from this ordeal, the day after we have a rest day. Chess addicts can play in the Australian Blitz Championship!

If you wish to see the rest of the tournament you can go to the official site of the Australian Chess Federation, ha ha, just kidding :-) Nothing there of course but luckily the organisers of the tournament had the foresight to make their own site. Enjoy :-).
Posted by doubleroo at 06:17 2 comments:

Today's games were entertaining if nothing else. I got a nice position from the opening in the morning but impulsively played 18.Qf3, the move I had planned against 17....f6, missing the simple 18....Be6. Instead 18.e6 should wrap up without counterplay. If Laurent had found 25...Kh8 with the idea 26. gh6 Be5!! or the computer suggestion 25....Rf8 instead of 25....hg6?? all three results would have been possible.

How did the white King survive? Ingenious defense 18.Kh2 and 30.Kf2 were truly inspired. Mind you the simple 26...cd6 would have deprived white of any counter-chances. Considering that it was a double round day I am not too disappointed, especially since either game could have turned sour.

Back to a 1pm game tomorrow. IM Guy West dropped in today and motivated me with a little adapted fortune cookie pearl.

A rolling Wohl gathers no loss :-)

Posted by doubleroo at 06:33 No comments: 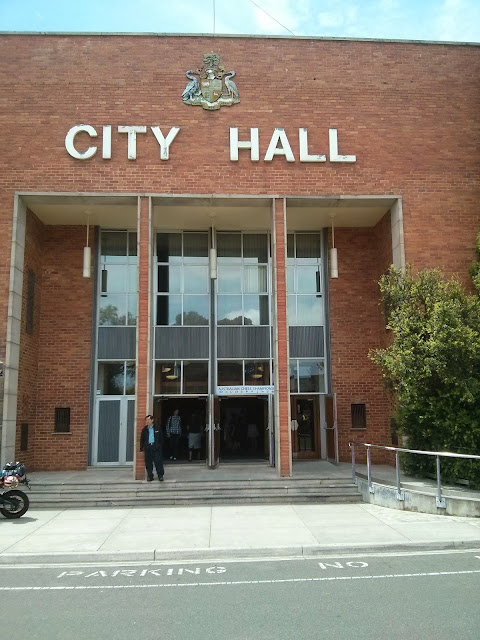 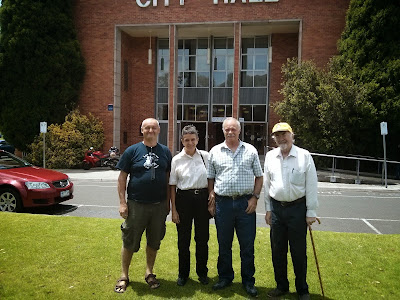 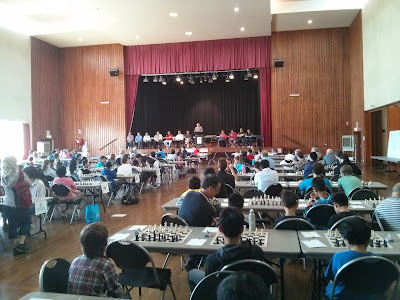 And to add to my joy tomorrow is a double round starting at 10am. Groan.....
Posted by doubleroo at 23:30 No comments: