was my first Olympiad. As the freshly baked Australian Champion I was given a berth despite me low rating. It was a less than spectacular debut.
The Phillippines had a change of President in 1992 and both the former Corazon Aquino and the incoming, Fidel Ramos graced us with their presence.

The “Brilliancy prize” was an eye-opener
to the world of FIDE and politics. Kasparov and Gufeld lobbied the judges to choose one of Kasparov's games. Timman wrote about the incident as did others. Ian Rogers got silver. Can you guess Ian's next move? 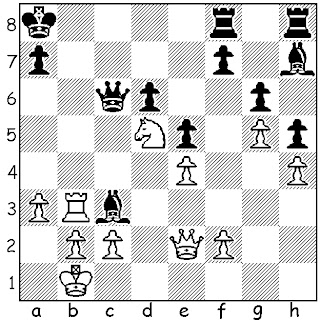 
Tanks in the street.

More politics. Armenia had an election, the ruling party won, the opposition cried “foul”. We met a UN observer at the “Chicken Coop”, a restaurant that was open late, who was getting drunk while cursing the whole charade. So not only FIDE elections are a joke I thought to myself! This was the first time I had heard that delegated were bought. The semi-official price was $500. One delegate complained that he had not been bribed as his vote was no longer needed.

My own score was as bad as it gets. After winning my first game against an unrated lad from Botswana, I lost my next five games.


The stuff of legend.

On the chessboard Steven made the biggest impression on me. Already in round one he had lost a piece in no time as White, swapped off into an ending...and won easily. But it was his round five game that inpired a poem, unfortunately lost in the mist of time. Can you guess what Steven played in this position? He won the game 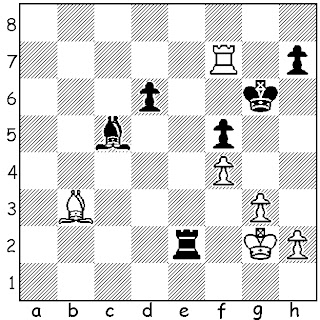 I remember little about the Olympiad in Istanbul. Germany won Silver which was a bit of a sensation but most of my memories are not chess related. Istanbul is a wonderful, ancient city with many wonders and a few dangers. Two are

Everywhere you go you will be met by aggressive shoe-shiners. Either wear thongs/sandals or make sure you shine your shoes before you leave the Hotel. Otherwise you could have an experience like GM Joe Gallagher. Joe got intimidated into getting his clean shoes shined and then got virtually mugged. His shine cost him about $50.

Whatever you do, do not use your Hotel-phone for anything. Not for a really quick call to give your number, not for receiving outside calls, nothing. Don't pick it up under any circumstances. Lots of countries reported laughable rippoffs including our own Leonid Sandler. His ex-soviet negotiation skills mitigated the rip somewhat.

A sponsor! Finally! Checkmate Condoms sponsorship was secured by our Women's team Captain, Jason Lyons. We all got t-shirts to wear like the one worn by Laura Moylan, pictured in this photo with Evylyn Koshnitsky. 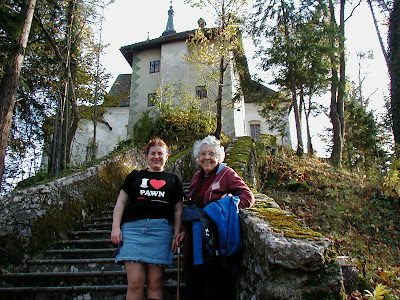 All thought it was fun and for once the players got all their travel expenses refunded. Next Olympiad we were offered the same sponsorship but a decisionmaker (don't remember who) thought that it was not appropriate to have chess associated with safe sex. So now we are back to begging the chess community for donations.... speaking of which...... ahem.....   http://www.acfappeal.aunz.org/

Gormally incident at the Bermuda Party

Who will forget Turin! Armenia, led by rising star Levon Aronian, won the Olympiad convincingly, I had my only good result but what a result. 7/8 with a 2649 performance rating, the best ever by an Australian according to Peter Parr. This is my favourite game. An original opening idea followed by unusually good technique from me.

All this was of little interest to the press of course. But when English GM Danny Gormally punched GM Levon Aronian at the Bermuda party because he was dancing with our own WIM Arianne Caoili, all the world wanted to know every detail and where there was none to be found.....

Just google “Gormallygate” if you feel like reading some entertaining rubbish.

Thanks for indulging me in my stroll down Olympiad Memory Lane. I will be bringing you daily updates from Istanbul 2012 right here :)

It has been a long time since my last post, mainly because nothing much post-worthy has happened lately. Got up 5.30am, went to work, came back in the evening, had dinner, watched Daily show/Colbert report, is not an exciting post.

Yesterday got interesting, at least for me. I got forwarded some pictures from 1966. Can you tell who this handsome young man is :) ? 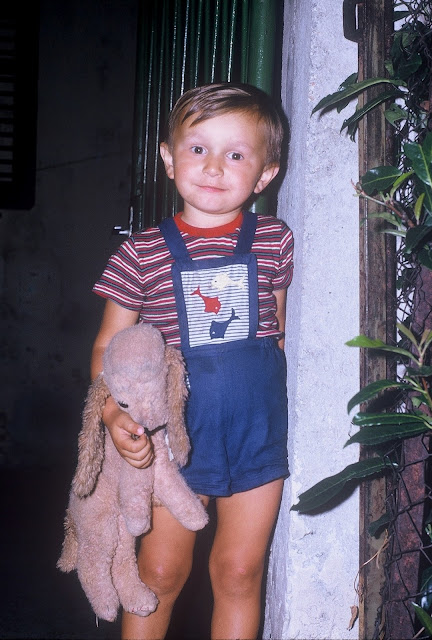 I also booked my ticket to Istanbul last night. I found a direct flight from Singapore to Istanbul on Singapore Airlines for about AUD $1100 and a connecting flight Gold coast - Singapore with Scoot for AUD $265. Not bad. On the way back I will play in the Raja Nazrin Shah international open in Kuala Lumpur. This tournament is always very strong. Last time I played it was won by Hou Yifan, before she won the Women's World Championship, this time Sergei Tiviakov is playing!

This tournament is organised and run by my good friend and colleague Peter Long and this year he has promised me that we will take a small side trip to Ankor Wat before the event so expect some nice pictures. If you are a foodie then there is no better place than KL in my opinion and no better guide than Peter.

Istanbul is going to be my first Olympiad since Turin 2006 so I am training a bit to get myself in some sort of shape. Apart from opening preparation I have been doing some studies to train my aging brain to calculate again. Want to see one?

White to play and scam a draw.

I have also been torturing my best students with these. Why should I be the only one to suffer?
Have a nice day :)
Posted by doubleroo at 19:51 10 comments: