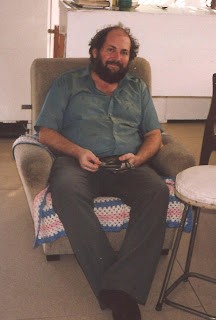 I first met Michael when I was 15 years old, in Sydney, at the Chess Centre. He was sharing a flat in Kings Cross with another chess player, Michael Walsh. I made friends with these two gentlemen and spent a lot of time at their place. One day I packed my schoolbag with clothes and moved into their place, crashing on their floor.

I was there for several months, three or four, I don't remember exactly but I do remember that when I moved in I was a novice. M.W worked during the day while M.J.C and I spent most of every day playing and studying chess. By the time I left I was one of the best Juniors in Sydney, mainly due to Michael. My contribution to the household was mainly cooking as I came from a restaurant background. Every Saturday I would raid my parents restaurant, when they were not there of course, and bring back bags of food.

When I moved out I moved to Austria for a while to finish my schooling, was back in Sydney within a year and met up with Michael regularly for blitz or just to go for a drink. He was a permanent member of the Sydney chess community and was always happy to play a game or share his knowledge with anyone who asked. His style was very positional and on his day Michael could beat anyone. Here is a game of his from the Australian championships in Brisbane 1995

I ran into Michael sporadically in chess tournaments over the years and it was always as if we had only seen each other yesterday. We both lived in Adelaide for some years and then later, coincidentally, Queensland. The last decade or so I was mainly in Europe and we lost touch so it was wonderful to see him again end of last year when Michael played in the Veterans and Disabled championship at the Doubleroo Chess Academy in Milton. Michael won the event :-)

Last week I received a call and then an email informing me of Michaels untimely passing. Deep vein thrombosis was the verdict. The funeral was set for Thursday March 2 at 2pm, yesterday. The hall was full of people, family, bridge players and of course chess players. I imagine if it had been held on the weekend even more people would have attended.

Geoff Corner, one of Michaels brothers and also a chess player, gave a very nice eulogy detailing Michaels life including many exploits that I was unaware of, like the fact that he was a "life master", whatever that is, and read messages from many people who's lives Michael had touched. Particularly touching was a message from a young lad who Michael was teaching chess who said he owed his interest and ability to Michael and wishes he were still here to teach him.

Unfortunately the funeral had a sour note to it. But I have deleted the details that were posted here originally. This is not because I have changed my mind but because I have thought better of responding to nastiness in kind.
Goodbye old friend, I know that if there is an afterlife you will be looked upon favourably for all the kindness and love you gave so freely all your life.