Opening Ceremony
With a difference! We had the honour of having our local member of parliament, Saxon Rice open the event. Our novel idea was to have our special guest play a few ceremonial moves against a cute harmless looking girl, eight year old Rachel Watkins, and then agree a draw. A great photo op. What is said about the best laid plans? Cute Rachel may be but she is anything but harmless. She had no intention of letting our dignitary off with a draw. Saxon was not phased at all and seemed visibly delighted as she made off with Rachels Queen. 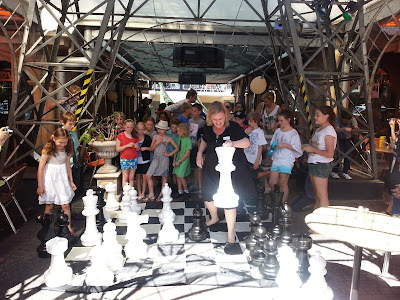 Finally, deep into an unclear ending, under mounting pressure from the organisers, the two combatants acquiesced to a draw and the tournament could start. 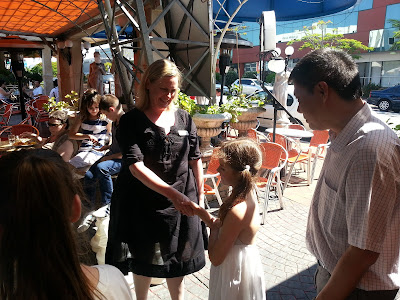 The Venue
La Dolce Vita restaurant and cafe was universally praised as an excellent venue for a chess competition. The games were played in the passage between the restaurant and the cafe and the Giant Chess Set was placed under the Eiffel Tower.

While the children were battling it out for the excellent prizes donated by the local business community, 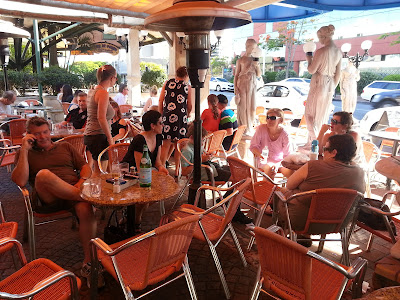 their parents were enjoying the excellent food, drinks and ambience of the cafe. La Dolce Vita indeed.

The tournament.
We decided on a 5 round, 15 minute a side rapid event with four categories. Open, Girls, Unrated and Girls Unrated. Joshua Grice won with a picket fence 5/5, only challenged by Abbey Anstey-Walsh, the winner of the Girls prize, who was two clear pawns up and with seven minutes against one. If she had not tried to "blitz" her opponent....
First place in the Unrated section went to Lachlan Congreve  and first unrated girl went to Charlotte Sleight. Charlotte's performance was even more impressive considering she had been unwell the last few days and insisted on playing despite her mothers reservations. All the standings and results have been uploaded here.

Thanks
To our sponsors for donating terrific prizes.

http://www.ladolcevita.com.au/
Donated two dinners for two
http://www.presentsofmind.com.au/
A variety of great gifts to train young minds
http://www.littleworkers.com.au/
All kinds of fun trinkets that the kids just loved
http://www.coldrock.com.au/stores/rosalie--icecream.html
Ice cream vouchers for everyone!

I must make special mention of Peter Long, organiser of countless International events, and senior FIDE trainer amongst countless other achievements. I invited Peter to Australia to help me put the Doubleroo Chess Academy on a more professional footing and he has been very generous with his advice and help . Here he is taking on a dangerous local, Justin Adams in Brunswick heads. 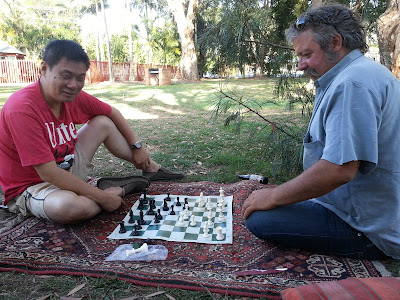 And last but not least a special thanks must go to Lynne Brown from the Brisbane Inner West Chamber of Commerce . It was Lynne's idea to have a tournament at La Dolce Vita, and Lynne who approached all the sponsors who are members of the Chamber. Lynne also stayed until the end and helped hand out the prizes.

Inspired by the success of our inaugural tournament we are now working on our second "First Sunday" event but the details are top secret. Watch this space for the announcement.