It was a bright sunny morning here in Erfurt, the capital of the German state of Thuringia. Almost blinding since the streets were covered with fresh snow definitely not a day to spend indoors. Luckily there are plenty of things to do on a Saturday, amongst them a demo. We had seen a poster the other day and since it wasn't a Pegida rally we thought it might be fun to go. You may have heard of Pegida in the international press lately. They started in Dresden and are concerned about an Islamic invasion of the Fatherland. Since Dresden presently has two Muslims per every thousand inhabitants you may consider their fear a bit Paranoid but their former Fuehrer, Lutz Bachmann, 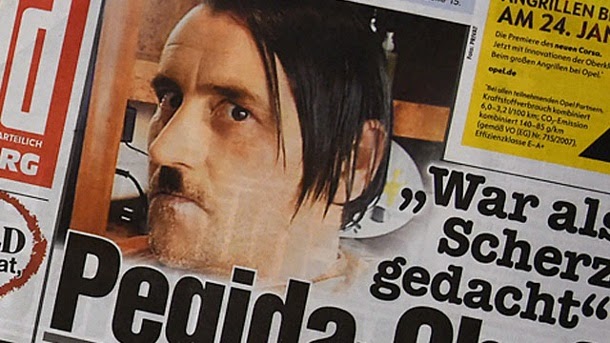 assures his followers its not. Also he is not a Nazi. Definitely not. Nevertheless he has been replaced as Fuehrer by a lady who is also definitely not a Nazi.

Although they sound similar, Pegada are sworn enemies of Pegida. Instead of being against the Islamization of the west, Pegada is against the Americanization of the west. Actually the last "a" in both stands for "Abendland" which does not have a good translation in English. It refers to Christian Europe, so everything west of Rome. The term was made famous by a book written in 1926 by Oswald Spengler, "Der untergang des abendlandes", which bemoaned the loss of European cultural identity. He compared ancient civilizations like the Egyptians and the Romans and their fall through the prism of art, literature, philosophy, politics and economic structure. It is considered one of the great works of German literature.

Oswald's contemporaries have dumbed down the message somewhat to cater to the intellectual capacity of today's audience.

We had some trouble finding the demo because it was neither clear where exactly it was nor exactly what it was about. We arrived at the designated meeting place but all we saw was a handful of people with signs that did not correspond with the advertised theme. 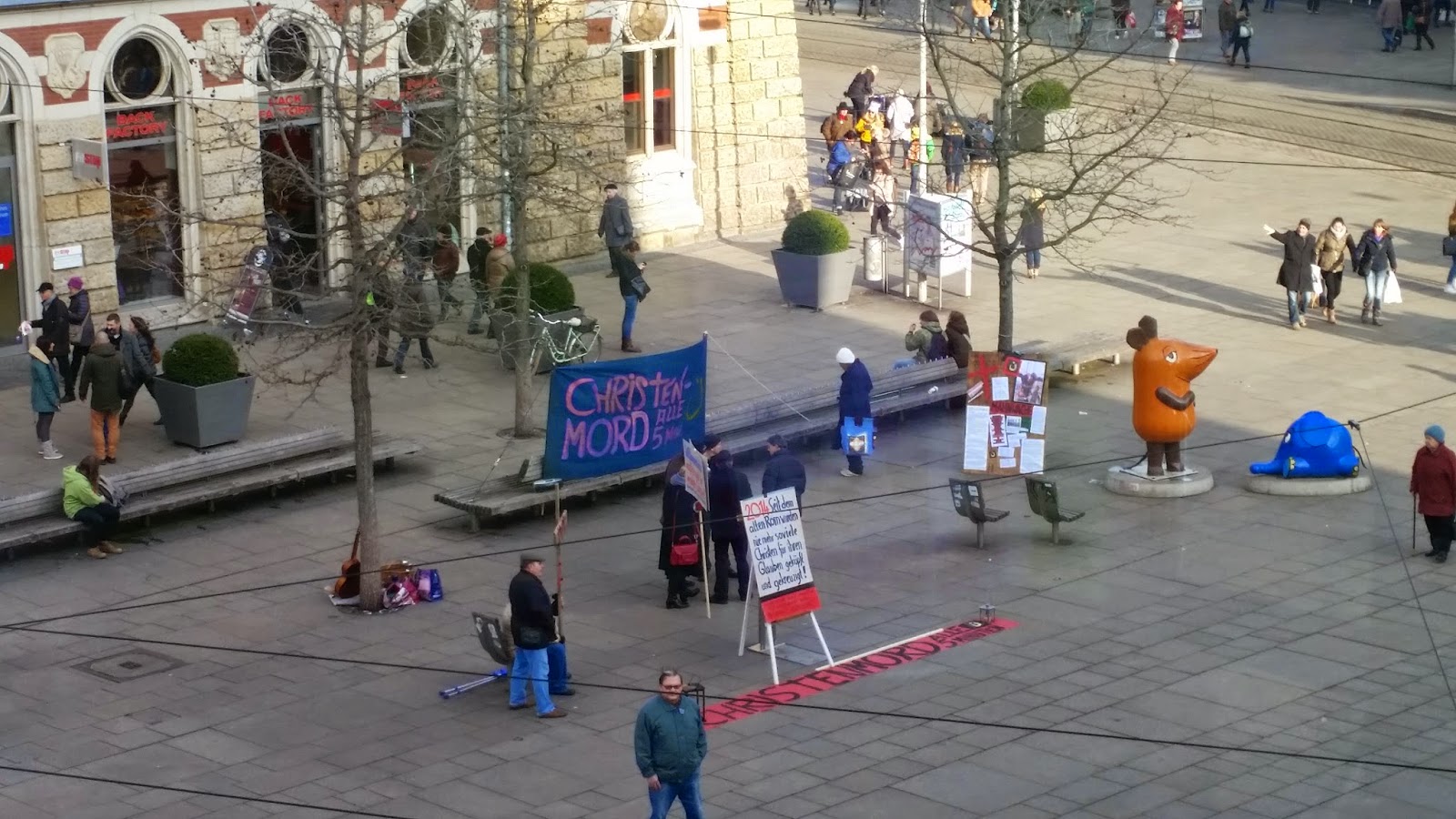 These people were protesting the murder of Christians in far away places but nobody seemed very interested. They soon left and we were left wondering if we had the right place or day. As it turned out our demo started somewhere else so we headed to the railway station. 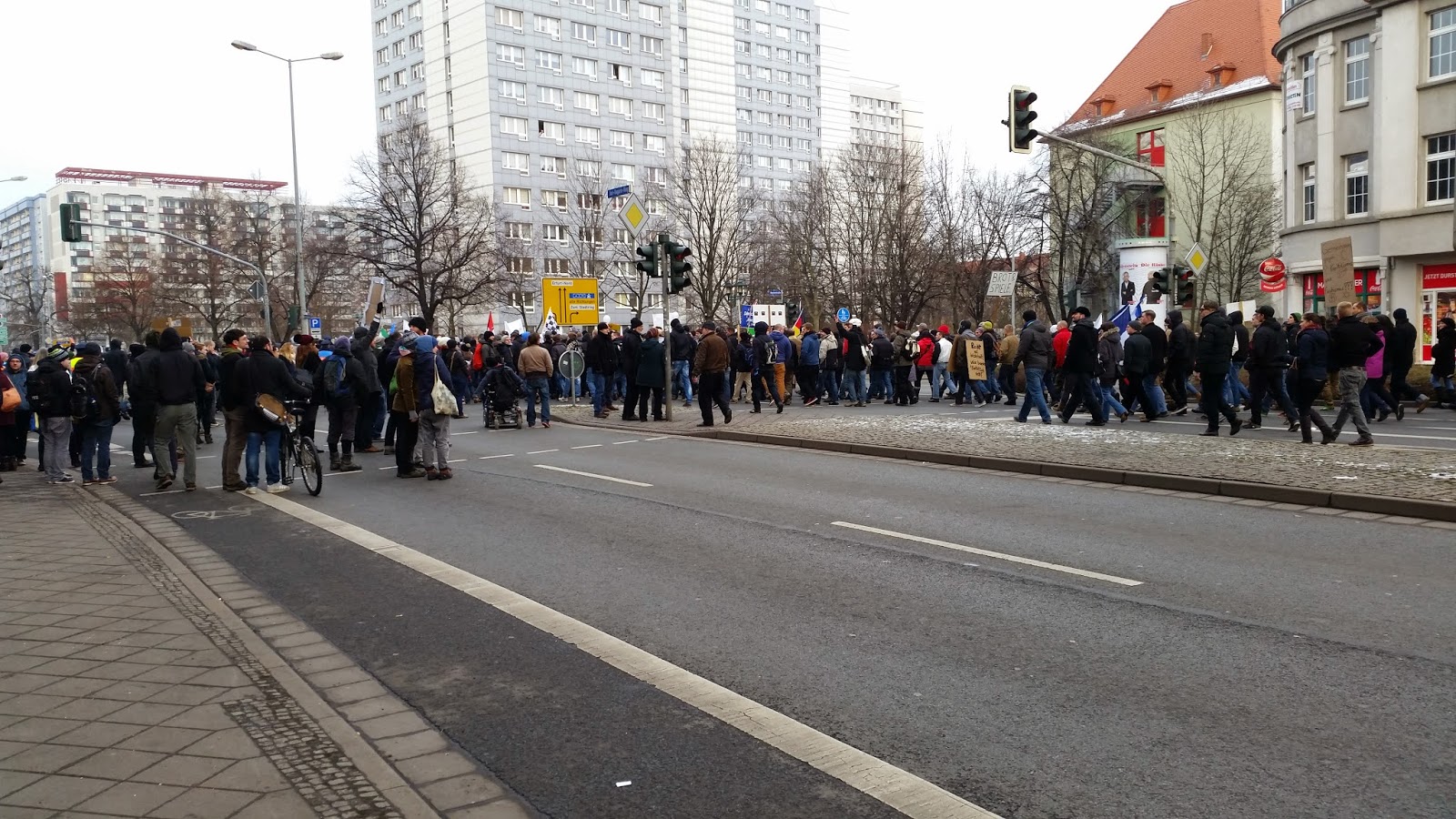 We finally caught up with them after following the sound of music and whistles. It was a diverse crowd, peaceful enough, so we followed them on a tour around the city. The messages were as diverse as the crowd. Some had dove flags, German flags with the middle cut out for some reason and some carried message boards with different themes.

"Falken", I was told, is the youth faction of the SPD, the social democrats. Others carried the Greek flag in support of the Greek left. Another group wanted fracking banned, which I thought it was anyway in Germany, and another lot wanted Germany out of Nato. All seemed fairly left wing peace orientated themes. There were riot police everywhere, sometimes provoked by teens in black clothing, Gothic writing, pimples and firecrackers.


The trouble was a few teens letting a few firecrackers off. Nobody seemed concerned. It takes more than that to worry Germans :-)

After walking around most of inner Erfurt, apparently because the intended path was blocked by a small group of young Nazi's protesting the protest, 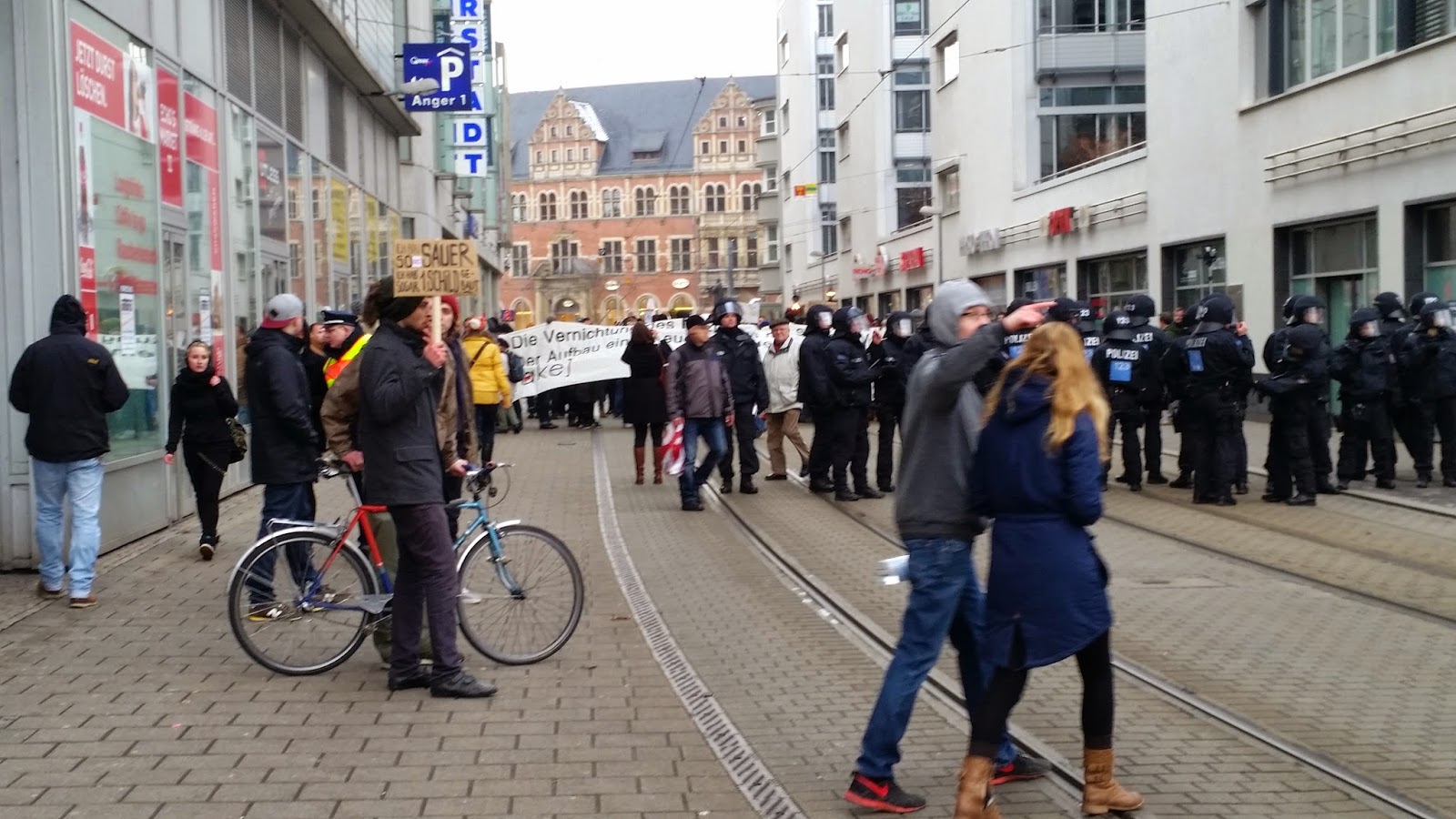 we made it back to the railway station again where some people started giving speeches. 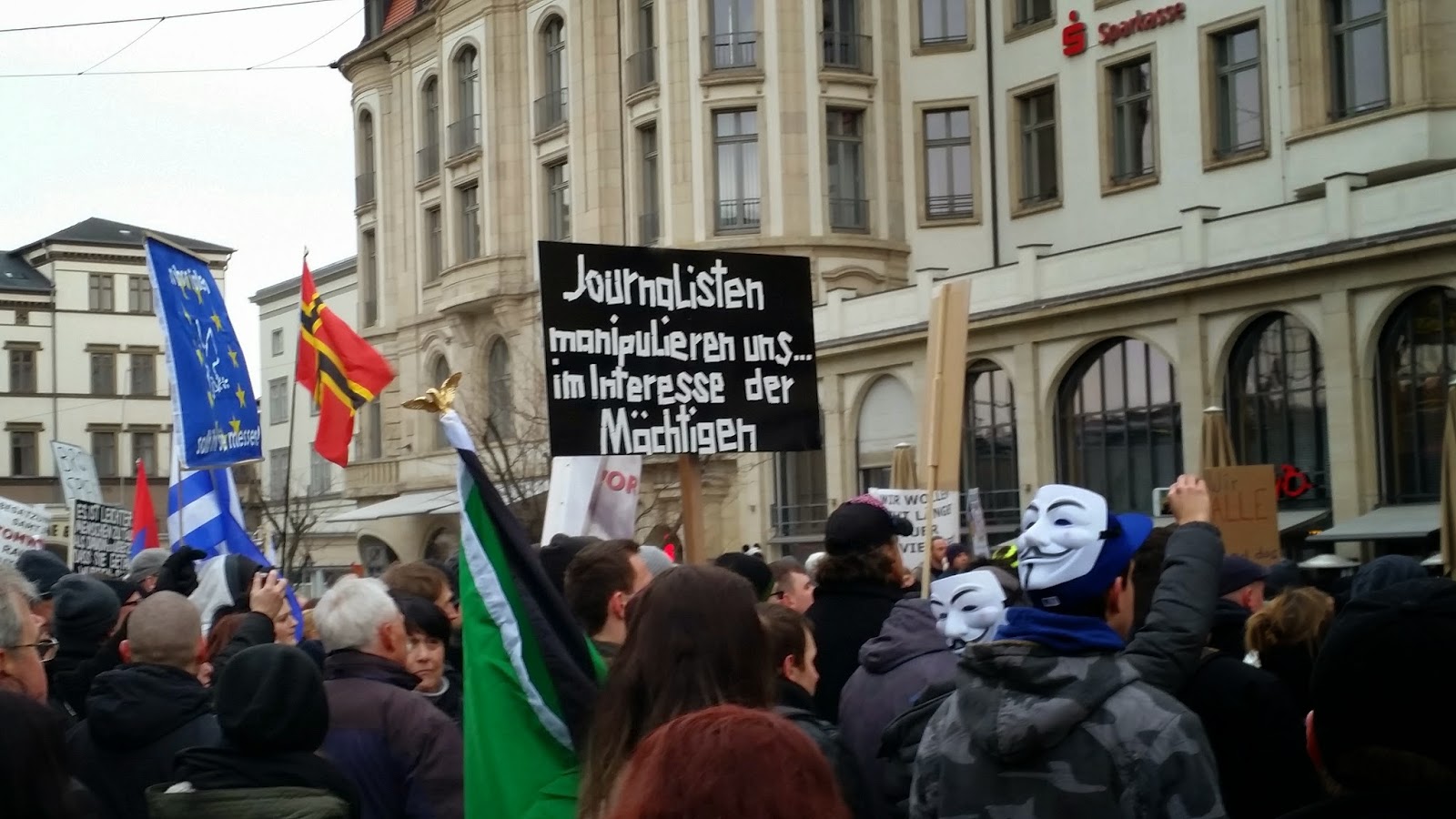 The atmosphere was quite jolly and the music really lifted the mood. I didn't know there was a German anti-war music genre.


I suddenly noticed that there was another group a block away from us protesting Pegada with American and Nato flags. The police stationed themselves between the two groups although it didn't really seem necessary. Not even insults were thrown. 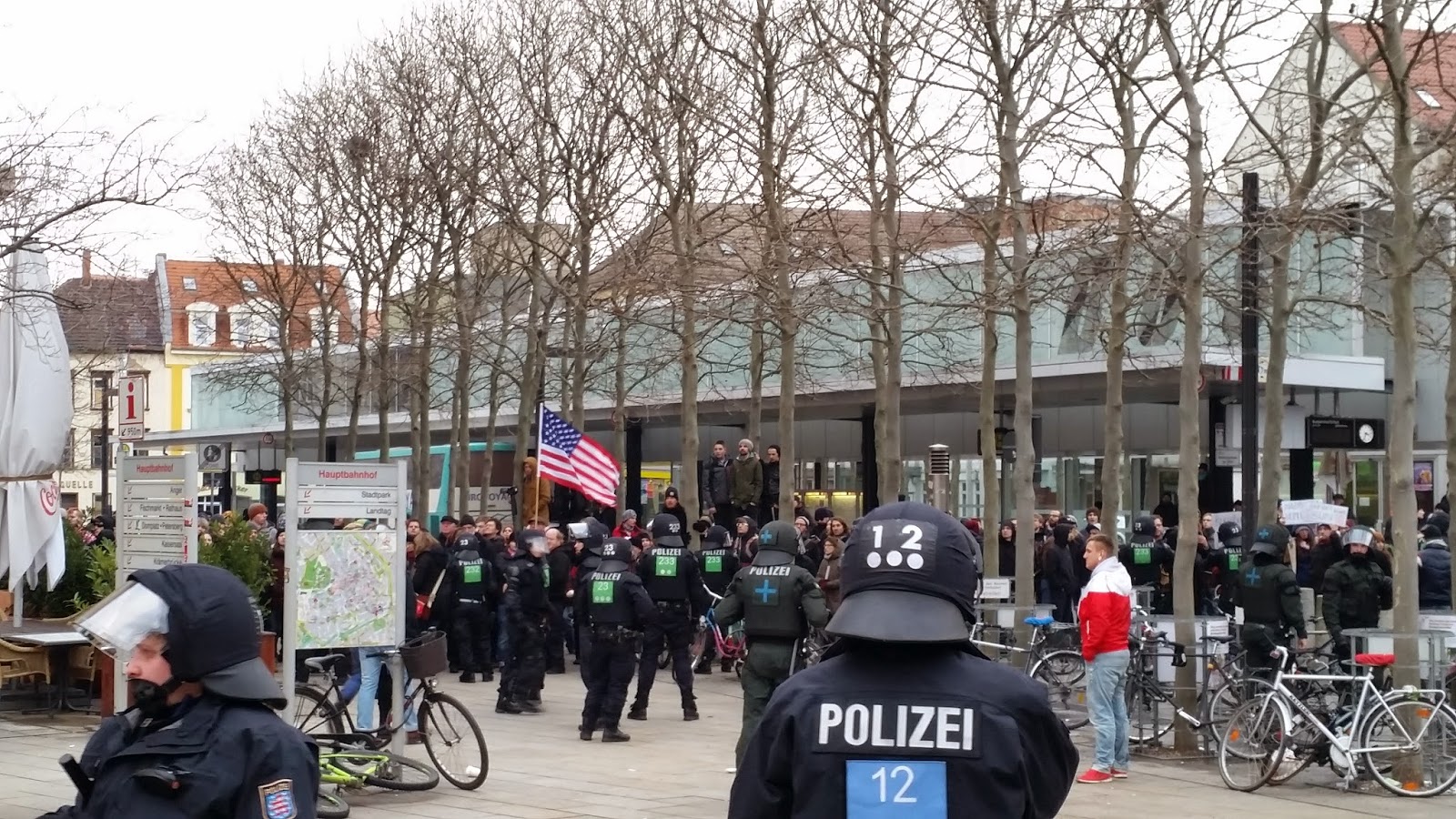 ENDGAME
On this occasion the word has nothing to do with chess but is rather an abbreviation of "Engagierte Demokraten gegen die Amerikanisierung Europas".

Translated it means, engaged democrats against the Americanization of Europe. I am not sure how they differ from Pegada and I'm not really "engaged" enough to find out. German demo's, at least this one, seem very complicated and one may need a degree to work it all out. Also there were three groups so I consider myself quite lucky not to have accidentally marched with one of the others. I forgot to bring my Swastika armband and would have felt out of place.
*disclaimer: I am being funny and don't really have one*

Legida
This is the Leipzig version of Pegida ( not Pegada ) and they also protest against foreigners, particularly those of the Islamic persuasion. They also claim not to be Nazi's, definitely not.

Suegida
This group is based in Suhl, same story and also most definitely, absolutively not Nazi's! If you claim otherwise you will be shot! Schweinhund!

Vagina
You think I'm joking don't you? C'mon admit it! Ha! I'm not, here's the proof...or should I say spoof. 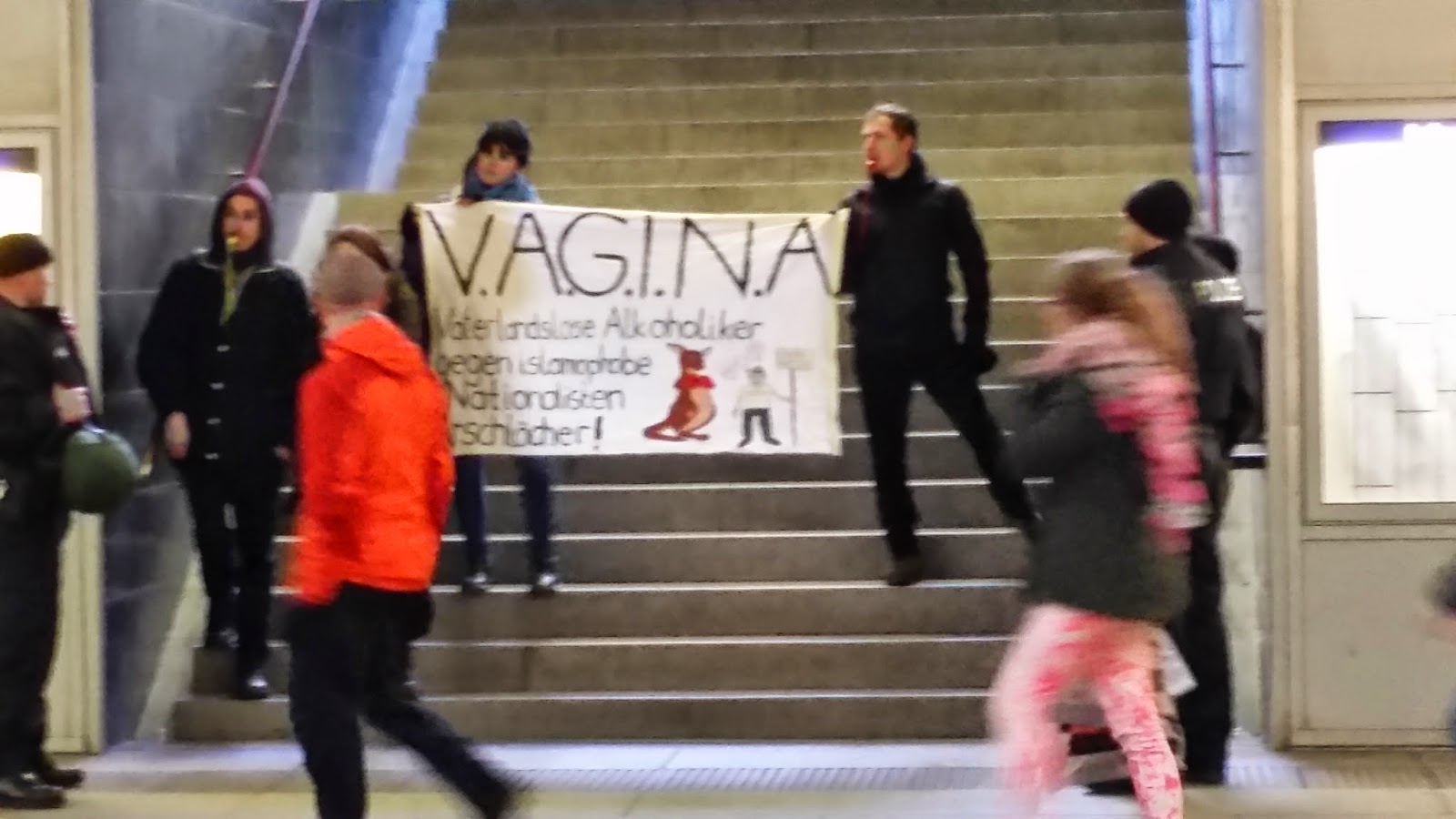 Translated, Fatherland-less Alcoholics against Islamophobic Arseholes.
Click here for their facebook page
.
Who said Germans have no sense of humour? Oh right, that was me. I take it all back. This group gets my vote.

That's it for this episode of Doubleroo politics. Thanks for reading. Tchuess.

Posted by doubleroo at 16:07 No comments: