Well three actually. Francoise Nina and I took to the road on Friday via the picturesque "Centre" of France. Four if you include Elliot.


We eventually got to Toulouse, met up with our team. 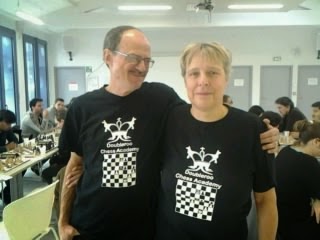 Judging by the uniforms worn by WIM Rike Wohlers-Armas (no relation) and IM Jules Armas this must be the Doubleroo France team. Currently we are still called Naujac :-) 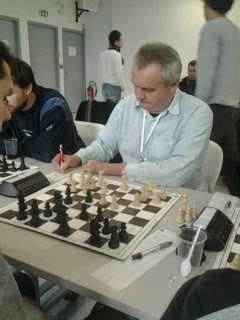 Yours truly. I kept my shirt on in the opening, uniform underneath. 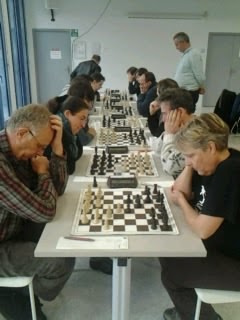 The team in action.

Now lets get to the games. I was playing on board three against a higher rated player with black so according to match rules my job was not to lose. I decided against hippo's and moderns and chose the Cozio defense. Everything went quite smoothly and I got a winning position with natural moves and some minor calculation. I nearly blew it with 32...Qd2 trying to finish the game off instead of just regrouping patiently and queening my b pawn. I missed 33.Rb1 expecting only Re1.  Then I completely panicked hallucinating that my opponent could play 40.Qh7+

Luckily I noticed just in time that I was winning again and did not try to avoid the winning line. A nervous end but alls well.... And the team won 4-1. Draws don't count in the French interclub competition.

And now a game you will enjoy. A crush starting with a pawn sack followed by a piece and then eschewing a queen offer by my opponent who was desperate to get rid of my Larsen/Hjorth bishop.

If you don't delve too deep you wont notice that my opponent could have avoided it all in the opening by playing his bishop to d7 or c8  instead of 9...Be6. My knight on h4 then looks a bit stupid.

Also I could have played the less thematic 20.Rh5 which is technically stronger (+14). I did see it but didn't fully appreciate how strong it was, Also 20.Ba1 was cuter. At least I didn't go for 20.Rd7?? Bb2 21.Rd8 Rad8 and although the black queen is gone so is my beautiful bishop and the game could have gone on for quite a while longer.

This game was also played as a "special request" by a friend who didn't like my opponent and asked me to crush without mercy. Avec plaisir :-)

Naujac (doubleroo france?) won this match too and convincingly 5-1. We are now midfield and should avoid relegation for another season. Yayy!

I left early because we had a long drive home, this time taking a different road, the A75 otherwise known as the Autoroute Francois Mitterrand, a revered former French President which is toll free and passes some of France's most picturesque and historic locations. 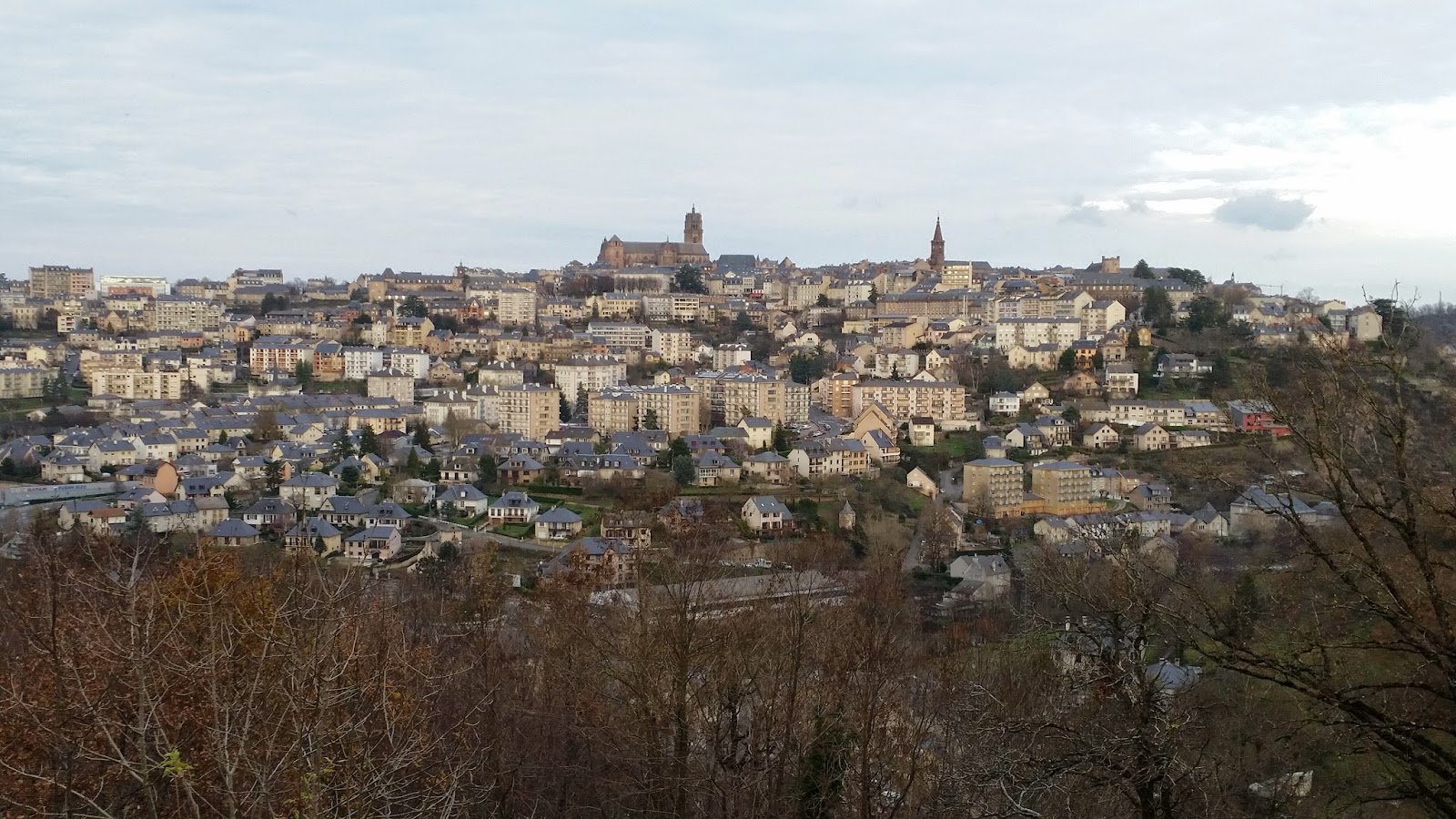 Rodez, according to the sign a centre of art and history. 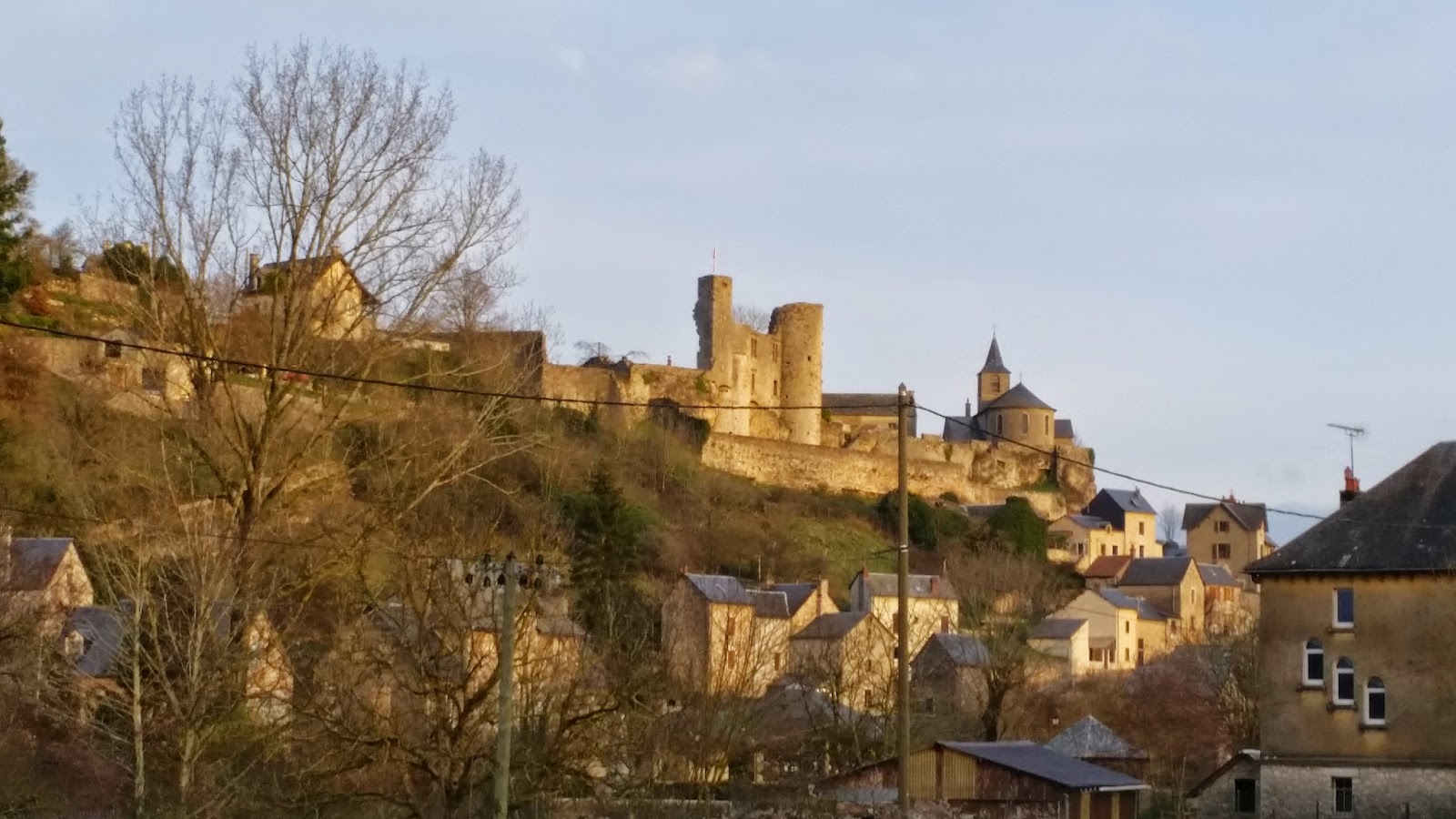 Another castle on a hill. forgot the name of the town, like I said, we were in a bit of a hurry unfortunately. No matter, driving in France in any direction you can find great food, historic architecture, museums and other reasons to stop. If you haven't been you have missed a lot. Just make sure you plan on getting a SIM for your electronic device well before arriving :-)