I woke up early this morning, just before 6 am, looked out my bedroom window and was rewarded with this view. Now I understand why the Nepalese wake up early. Soon the clouds lifted, raised by the heat of the sun and the living god was obscured from sight again. The locals believe that the mountain is holy and it is no longer permitted to climb it although ascents have been made according to wiki 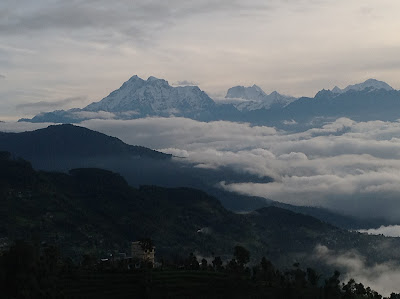 The valley below was also visible in it's full splendour so I was feeling in an almost giddy mood by the time I made my way down to breakfast. I sat down with my new Indian friends, Atanu Lahiri and Souvik Chakraborty, ordered Aloo Paratha and coffee, and suggested that we walk to the Buddhist monastery at the top of the hill. My mood made a 180 degree turnabout when they informed me that we didn't have the time as the last round had been moved to 8am! WHAT??? I could immediately feel a wave of anger rising inexorably to my Sahasrara . Were they serious? When was this decided? Yesterday? Nice of them to tell me...NOT!! 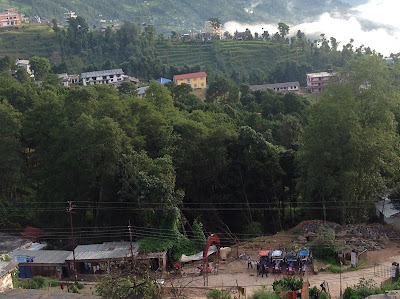 So I was in a foul mood by now, expressed my displeasure to the poor organiser, who must by now be wondering if inviting westerners is such a good idea, and proceeded to my board. 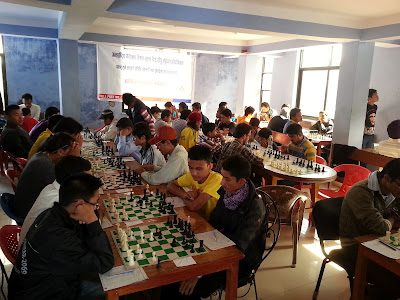 Here I am looking at the ruins of my position after the opening. It's like an Alekhines defense but white for some reason has a queen on e2 and has pushed his h pawn to h4 for no particular reason. Unbelievably I got away with it 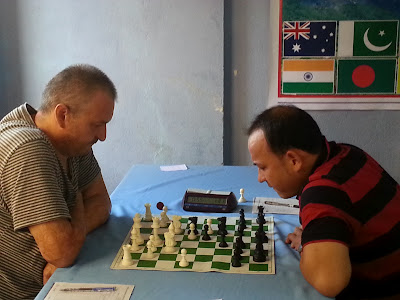 And now to the game. I played the Chigorin (2 Qe2 ) against the french, transposed into an Alekhines defense where the queen has no business being on e2. Then I threw in h4 for good measure. What does that do you may ask. Well it loses a tempo and weakens the queenside. Luckily for me my opponent Manish Hamal, the current Nepalese champion I believe, was taken off his guard by my ludicrous play and played a faulty combination wishing to finish me off immediately. There was a small hole in it.

So I finished on 8/10, half a point behind the winner Aminul Kh Islam from Bangladesh. He beat both IM's so his victory was fully deserved. I will share some prize-money and will lose about 10 elo points I imagine. Could have been much worse. Always look on the bright side of life..
Posted by doubleroo at 23:33