This afternoons game was a quick crush. I was paired up to another young unrated Indian boy who must be quite good to have made 2.5/3 but he misplayed the opening. He was also the victim of my new resolution to play as aggressively and quickly as possible just to get out of the tournament hall as soon as I can.
The organisers are trying their level best to keep the spectators away from the players and have reduced the noise to just the background chatter coming from all parts of the building. The very concept of silence seems to fall on deaf ears.
After the very quick game I went for a long walk in the tea gardens. 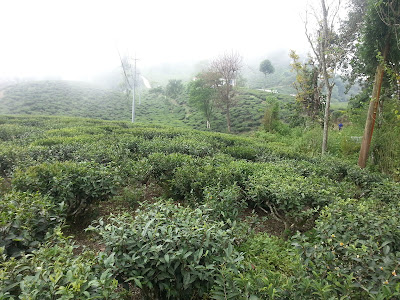 You have to climb to the top of the hill and walk down the other side to get some relief. At least the constant sound of car,bus,truck,bike horns is not omnipresent. Anyway, enough whining, over to the game.


Not that much to say, we got a queens gambit accepted with black having the extra move f5. I think he would rather have it back on f7. Anyway as I said, positional me has been sent home because he is a patzer. The mad axeman has been left behind. Motto, win lose or draw, just do it quickly.


So only three days and six games to go. I wonder if one can buy earplugs here?
Posted by doubleroo at 04:36