Charikot was full of Women dancing in the rain in red sari's in the annual Teej festival . The gruelling schedule did not allow me to see the main event but women were dancing all round town. After I finished my round 7 game I caught this dance at the bus-stop. It went on all day and although we heard it in the playing hall it did not disturb me personally. Nice background music :)  According to the locals the women dance and pray for the health of their husbands. Nice :)

This young boy wanted to have his picture taken. Least I could do. Imagine if he new he was going to become world famous! 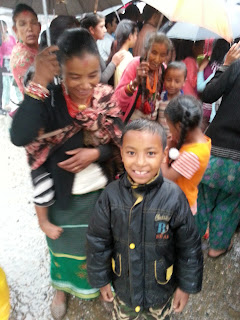 It seems my morning round play is still poor. At least I made it to the round on time but the chairs have still not been fixed. A piece of cloth and a rubber band and no squeaking. My opponent also deserves credit for playing good moves and had he continued and not offered a draw at the first legal opportunity the game might well have turned out half a point worse. I must admit to not taking it as well as I should and complained bitterly to the organiser about the noise level and constant loud talking of the spectators outside.

To their credit they made an announcement at the beginning of round seven and did constantly monitor the behaviour of the audience and amateur players. It was the afternoon, there was nice singing coming from the street below and I was facing my highest rated opponent so far but had no trouble collecting the full point.

Tomorrow morning I am back on board one, half a point behind the leader with the black pieces and he is rated over 2200. I haven't beaten one of those for ages! Wish me luck, I'll need it.