Armenia's win was a dream come true. For the 3rd time in the last four attempts this tiny nation, wedged between Azerbaijan and Turkey took the gold in the most prestigious event in world chess, the Olympiad. As amazing as this feat is, it is no fluke. Armenia is a TEAM in the truest sense of the word. They are friends and help each other any way they can. They train and socialise and trust one another.

To fully understand the significance of their victory one needs to understand Armenian history a little as well. Relations between Turkey and Armenia have been tense for a long time to say the least and some of this leaked through even at the prize giving ceremony. The organisers (inadvertently?) had the wrong flag and announced "you have just heard the Armenian national anthem" after it was played, while when it was the ladies turn they announced "please rise for the Russian national anthem" before the event. Another little accident I'm sure.

Another thing worth noting is that the players had the whole country behind them including the president. Of the country or chess federation you may ask. Both! The next day he sent his personal jet to pick up the team and bring them back for a parade in Yerevan where thousands of fans packed the streets to meet them. Chessvibes published an excellent pictorial of the event.

Levon Aronian, a remarkable young man who I have known since he was fourteen and am proud to call my friend also won the individual gold for the best performance on board one. Not only did he play 10 games, prepare for them and help his team but also helped prepare his girlfriend, Australian women's board one Arianne Caoili, but aslo found time to cheer other friends up (like me) who were not having the best Olympiad. He was also always ready to indulge fans with photo's and autographs or a few words. 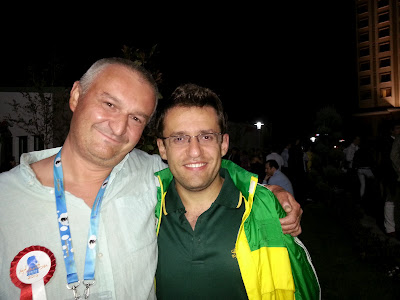 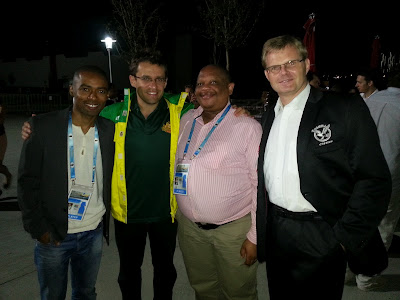 Kenny Soloman, South Africa who scored a GM norm under trying circumstances that were hilarious but am not at liberty to repeat :( , Lev, Watu Kobese, also SA, and Leonhard Mueller from Namibia.

I have to say in all honesty that I did not enjoy this Olympiad as much as other ones for several reasons. I'll just mention one. We were housed at an airport hotel far from the city and other countries were scattered around so we hardly saw friends from other countries in other hotels. I could go on for quite a while but won't. Armenia's success overshadowed all the other negatives for me and turned it into an unforgettable event.

Being able to enjoy the successes of ones friends is an indispensable life-skill grasshoppers :-)

I am now in Kuala Lumpur enjoying the hospitality of my BFAM, Peter Long, and flying to Kathmandu tomorrow to cross another experience off my "Bucket list" Internet access allowing, I'll share it all with you. Hasta la Pasta Amigo's :-)