The usual routine in chess tournaments used to be, sleep until noon, have some lunch, play the game sometime in the afternoon, and prepare and/or watch tv until the wee hours. As part of my new strategy, I've been getting up early, getting some exercise before breakfast, more after breakfast, skipping lunch and going to bed a bit earlier.

So far the new approach has not really paid dividends. Today was more luck than skill. My opponent, a former Queenslander and old friend, Damian Norris defended a tough position for a long time and nearly inflicted a second loss on me.

I had company for my morning power-walk today, the Blindfold King, world record holder in simultaneous blindfold games, Timur Gareyev. Timur drew, so he isn't reaping benefits yet either. 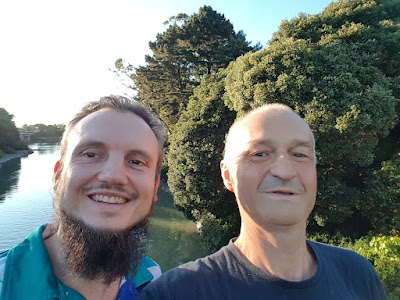 I have analysed both games with Stockfish and have to come to the uneasy conclusion that I did not play much weaker than usual. My opponents just played quite well. Oh well....