Well, the tournament is underway. Timur Gareyev made it this time, National Party politician made a laboured chess analogy and the rules of play got read out to us.

It seemed no lessons were learned from the last tournament about mobile phones. They are allowed in the playing hall as long as they are turned off and in your bag under the table or in your jacket. A disaster waiting to happen.

On the bright side, the venue is excellent. Roomy, great view lavatories close by and a nice restaurant and bar just a few steps from the playing hall. Chess players get 25% off as well. 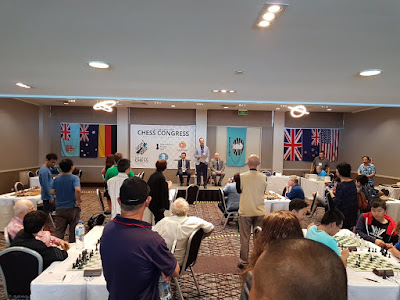 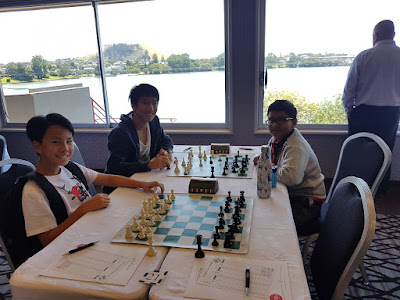 I must be the Robin Hood of chess, in that I take from the rich and give to the poor. In the George I took all my rating points from the players rated above me and gave to those below me. My overall profit of 6 point was a heavy burden to carry and I needed to get rid of them immediately so donated them to Alana. She initially seemed reluctant by spending the first hour mainly concentrating on the live boards and getting a bad position but since I insisted...

The game started turning around move 24...Bc5 which I had not considered but only another error 26.g4 made white's life difficult. 26...Rd8 was an unpleasant surprise. She played well from that point, and I just collapsed and resigned. Just deserts for not taking the opponent seriously.

Oh well. I'll just have to rob the rich later on.